Fan-filmed video footage of KILLSWITCH‘s performance can be seen below.

With KILLSWITCH ENGAGE and ANTHRAX rotating the closing slot over the course of the dates, the tour will criss-cross the continent, wrapping up in Boston on May 7. The intense and dynamic THE DEVIL WEARS PRADA is providing direct support on all dates.

2016 saw KILLSWITCH ENGAGE appearing on a “Stars Wars”-themed Revolver cover, staging an unforgettable and intimate, five-club New York City takeover for album release week, and embarking on an impressive “Incarnate” world tour. The band also released a limited-edition seven-inch single as part of the spring version of Record Store Day in April 2016; it featured “Define Love”, an unreleased track from the “Incarnate” sessions. 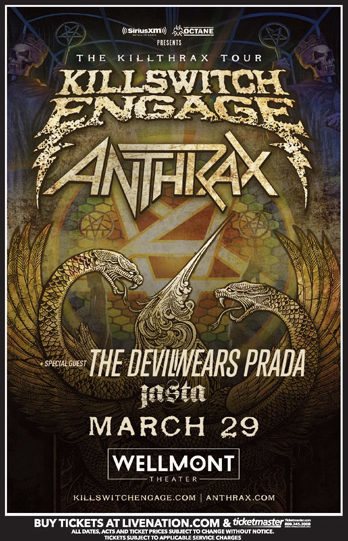