British rockers THE DARKNESS will release a new studio album, “Easter Is Cancelled”, on October 4 via via Cooking Vinyl.

Frontman Justin Hawkins said about the follow-up to 2017’s “Pinewood Smile”: “We live in dark times. As power-hungry clowns cast a shadow of despair across this land, our people cower in tumbledown hovels. The birds do not sing and the children do not dance. Hope is crushed.

“We are men in tight costumes and we are ready to fight with every weapon that our forefathers have bequeathed — the guitar axe, the drum hammer, the bejewelled codpiece and the banshee wail of righteous anger.

“Nor shall we be cowed by the naysayers, nor shall we be bought off by the money lenders, nor gagged by the reeking stench of pious indifference that pours from the orifices of the clown-lords.

“Cometh the time, cometh the band. We are THE DARKNESS and we bring you light.”

THE DARKNESS‘s new tour starts later this year. Full tour dates will be revealed next week, and go on general sale on Friday, April 12, but to get the earliest opportunity to purchase tickets, fans who pre-order the album will receive an exclusive link to the advance pre-sale.

Another of the exclusive items available within special fan bundles is a strictly limited-edition T-shirt featuring Justin Hawkins as an Easter Bunny. If ordered before April 16, it will be delivered to U.K. addresses in time to be a very Good Friday gift. And for fans in farther corners of the planet, it will make a magnificent May Day present.

The album will be released digitally and in full technicolour physical glory as a standard CD, digipak CD with bonus tracks, gatefold LP, limited-edition color vinyl gatefold LP and cassette. The album is available to pre-order now from the band’s official store with special signed copies and exclusive album bundle offers. 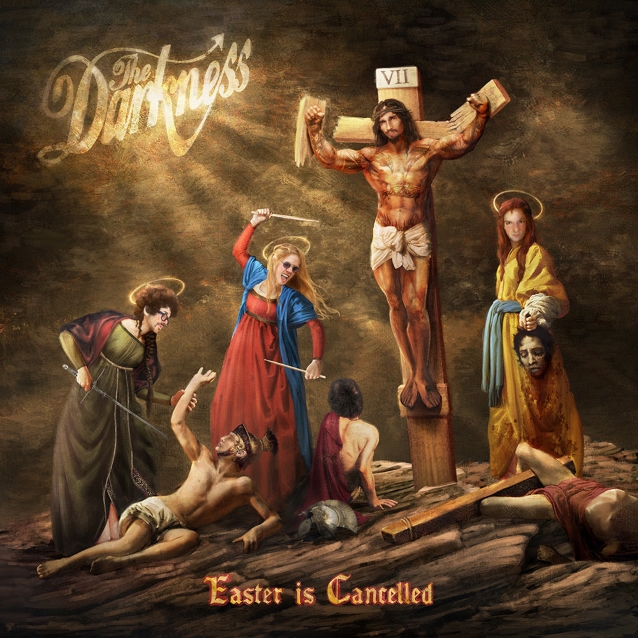