Jay’e Jones, the Joshua Tree, California-based tattoo artist who was roommates with Tera Wray Static, the widow of STATIC-X frontman and founder Wayne Static, at the time of Tera‘s death, has released a statement regarding her friend’s passing.

Jones said: “I came home [Wednesday, January 13] night after work, and found one of my dearest friends had ended her life in my guestroom where she was staying… I am working closely with her family and friends to honor her memory, in the best way possible.”

The official statement, which was apparently approved by Tera‘s mother, reads as follows:

“Love conquered all on the evening of Wednesday, January 13, 2016. After 14 months of separation by death, Tera Wray Static took fate into her own hands, and ended her life to be with the man she loved.

“So it is with heavy hearts we confirm her suicide. Her body was discovered by a friend whom she had been living with temporarily. The exact cause of death has yet to be released by the coroner’s office, but a drug overdose has been ruled out.

“Tera suffered from depression since the death of her husband, Wayne Static of STATIC-X, who passed on November 1, 2014. Close friends of the couple had this to say:
“‘We are deeply saddened over the news, but feel a peace that she is together with her husband. The undeniable bond they had from the moment they met throughout their remaining years was an intense, true love that only few experience.

“Tera was deeply loved by her friends and family, and we politely ask that their privacy is respected during this difficult time.'”

Adult entertainment attorney Michael Fattorosi, who last spoke to Tera one day before her death, told New York Post‘s Page Six that Wray left behind a note instructing her roommate to call him and Tera‘s mother.

“She was one of the sweetest, most gentle women I have worked with in [the adult film industry],” Fattorosi told Page Six. “She had a light to her that was evident when she walked into room. She was always smiling and happy. I know she loved Wayne dearly. When they met and got married, she left the [adult film] industry to go on tour with him and the band. From what I understand, she was constantly by his side. His death must have weighed on her tremendously.”

Last July, Tera paid tribute to her late husband with a sleeve tattoo that she showed off on Facebook.

Wayne Static died after mixing Xanax and other powerful prescription drugs with alcohol, according to the coroner’s report. The 48-year-old Static, whose real name was Wayne Richard Wells, was found dead in his Landers, California home on November 1, 2014. 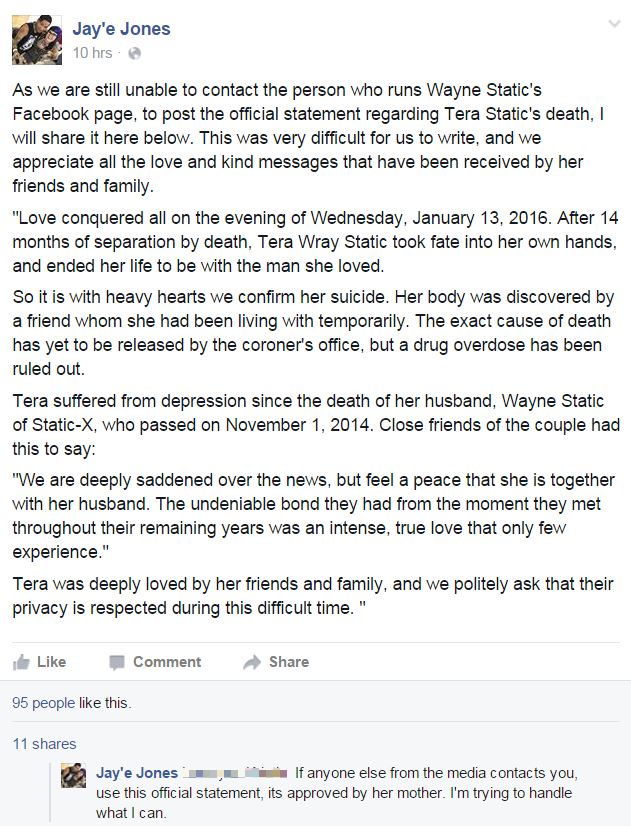