Professionally filmed video footage of METALLICA performing the song “Blackened” on September 13 at Bell MTS Place in Winnipeg, Manitoba, Canada can be seen below.

According to CBC News, METALLICA‘s concert in Winnipeg set an attendance record, with more than 17,000 fans watching the band perform at Bell MTS Place.

The September 13 METALLICA show, promoted by Live Nation, was set up in the round, with the floor open for general admission standing room with no seats.

As previously reported, METALLICA‘s September 6 concert at the Pinnacle Bank Arena in Lincoln, Nebraska was dubbed the heaviest ever by the Lincoln Journal Star, with a “dynamic weight” of up to 240,000 pounds.

Some 15,000 fans attended the record-setting show, with the five-year-old building’s roof holding up under the tonnage which hung from the arena’s rigging grid and steel beams attached to the major trusses. What made that even more impressive was that the stage was in the middle of the arena, so all the production gear, sound and lighting hung in a circle in the middle of the building.

The setup took less than five hours to complete — far less than the nearly 10 hours it took to get everything ready at Minneapolis’s Target Center two days earlier. Venue manager Tom Lorenz explained: “That was a desire we had during the design phase, about having the structural capacity to hang the biggest shows and to have the building really fitted for concerts… Not every building will be able to put up all of [METALLICA‘s] show. We were able to do it well and do it fast.”

METALLICA is in the back half of its three-year, 134-city “WorldWired” tour in support of its most recent release, 2016’s “Hardwired… To Self-Destruct”. 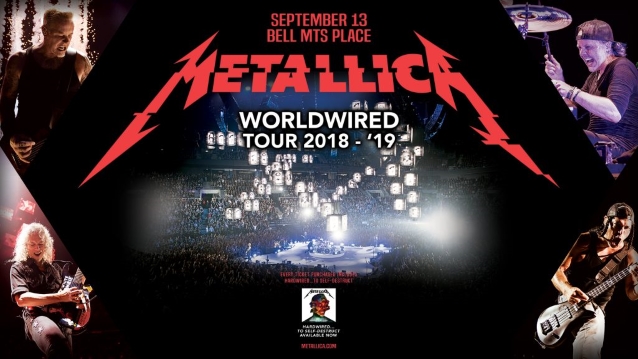