After the very successful “Hell Over Europe” tour last year, ABORTED is now bringing the “TerrorVision” to North America.

Vocalist Sven de Caluwé comments: “Since ‘Hell Over Europe’ was such a good time, we decided to bring the lineup as complete as possible to North America where we will spread the ‘TerrorVision’ for the first time. We are beyond stoked to be touring again with our good friends in CRYPTOPSY and BENIGHTED, as well to have Stefano [Franceschini, bass] suffer through two sets a day. So you can come on over, enjoy some blastbeats, place your bets on how many kg’s or pounds Stefano will weigh at the end, and come have a chat with us all. On top of that, we brutalized the fine people from Panda Productions once more for the third video for ‘TerrorVision’, this time for the lovely chanson d’amour called ‘Deep Red’. This rattling tale of romance enfolds in fields adorned with unicorns and many more politically correct settings. Go live a little people, listen to death metal and bang your damn heads to the power of the Blast! Praise the scroll!”

Sven previously stated about the disc: “The album talks about a lot of things that have been happening in the last couple of years where the public opinion is clearly being molded and manipulated. There have been studies in communication showing that 55% of communication is non-verbal impact, 38% is verbal communication and the actual message is only important for about 7% of it. I know retarded figures that don’t mean much by themselves, if not telling us that people don’t give a fuck about what you’re selling, as long as you package it right and the media/politicians know this all too well. The rise of ISIS has a lot to thank to the media as well, bigotry, racism all tools used by media to remove the eye on the actual problems for the human race as a whole and our planet.

“It’s not so death metal in itself, but it’s all packaged in our depraved little ABORTED sauce of dark humor and gross thesaurus bullshit language while containing a pretty strong message!”

With “The Necrotic Manifesto” and ABORTED‘s last album, “Retrogore”, already showcasing what the band is capable of, “TerrorVision” lifts death metal to a higher level of intensity, atmosphere and brutality. Produced by Kristian “Kohle” Kohlmannslehner at Kohlekeller Studios, “TerrorVision” is not just a new chunk of high-class brutal death metal, it’s a piece of art pushing the boundaries of the entire genre by combining over-the-top musicianship with skilled songwriting, a clear yet organic production and inexorable brutality that has no equals. 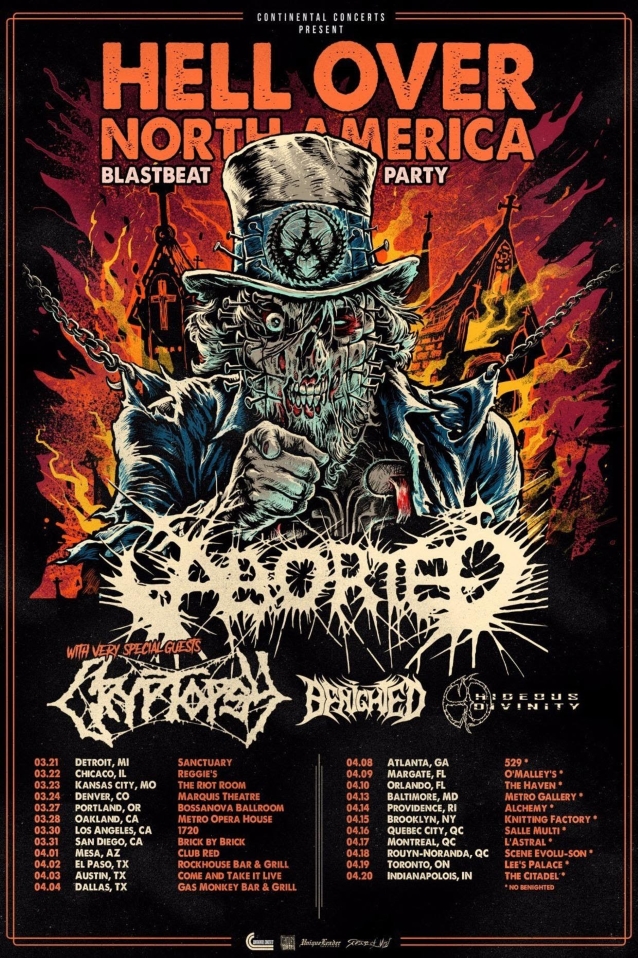