Australia’s Heavy magazine recently conducted an interview with Wednesday 13. You can listen to the entire chat below. A few excerpts follow (transcribed by BLABBERMOUTH.NET).

On the “movie element” to the band’s forthcoming “Necrophaze” studio album:

Wednesday: “I’ve always had this movie element to everything I do — all the imagery and everything is based on horror films, or horror film-inspired imagery and things like that. I’ve always added that element into what I do with everything. With this record, I went into it, even more, to make it look like a movie, basically make a soundtrack. I’ve always made music and wrote songs about horror films and stuff, but to actually create an atmosphere, have someone go in behind our music and add another kind of soundtrack behind it. Yeah, it definitely took on even more of a theatrical movie vibe, more so than the other releases. We thought anything worth doing was overdoing, so we did it right. The results are the record and we’re super happy with it. It turned out killer.”

Wednesday: “I don’t think so. Again, I don’t know what’s heavy, what’s not. The last record definitely had more of a dark vibe to it with the album cover and the band photos, and just overall, the atmosphere of that record was more of a dark and heavy vibe. Whereas this is kind of more of a return, I think, to what people maybe know about WEDNESDAY 13 from the beginning. This is a perfect mix of everything. It’s sort of covers the whole spectrum of everything I’ve done. Yeah, I don’t know if the next record, what it’s going to be like. If it’s going to be more like this or heavy, I don’t know. We’ll cross that bridge when we get to it. But, yeah, I like to keep people guessing. I don’t like to put the same record out. I like to do different things.”

On whether “Necrophaze” is a concept album:

Wednesday: “Not at all. I don’t like concept records. I did one and I did it as minimal of a concept record as I possibly could and that was still too much. I don’t want to put that much thought into it. I think with some horror films… I didn’t want to make the record like a puzzle. I didn’t want you to sit there and think about it and unlock all of these things. I wanted the record to hit you across the head like a bat, a ‘funhouse bat,’ so to speak. That was the whole theory of what we did with this record, was to keep a fun atmosphere to it. I think we did.”

On using more keyboards and synths on “Necrophaze”:

Wednesday: “I love keyboards and synths, and all of that stuff. I’m a soundtrack nerd. There’s nothing I love more than old, classic, or what I call the late ’70s, early ’80s John Carpenter soundtracks with all the synths and keyboards. I love all of that. To incorporate some of those types of sounds into our music was something that I just wanted to try. We did that with this record and we had Roy [Mayorga] from STONE SOUR, who kind of worked with us from the very beginning with the songs and sort of added these elements and added these keyboards and all that to it. It just added more to it. It kind of brought them to life, so to speak. That was a cool thing. I would like to continue using those sounds. At the end of the day, everybody wants to have a cool record that just sonically sounds good. After you hear these cool little keyboard notes and things behind the music, it gives it an extra, sonically a good sound. Why not? Why not decorate the song? And that’s kind of what we did — Roy decorated our songs.”

“Necrophaze” will be released on September 27 via Nuclear Blast Records. The disc was recorded by Michael Spreitzer, who is the producer, recording engineer and longtime guitarist of DEVILDRIVER, and is the first WEDNESDAY 13 record to feature guest spots, which include performances by Alice Cooper, Mayorga (who provides an eerie, authentic, ’80s-inspired synth soundtrack-score to the album), Alexi Laiho of CHILDREN OF BODOM, and Cristina Scabbia of LACUNA COIL. Also making an appearance on the album is Jeff Clayton, member of legendary punk bands ANTISEEN and GG Allin‘s MURDER JUNKIES. 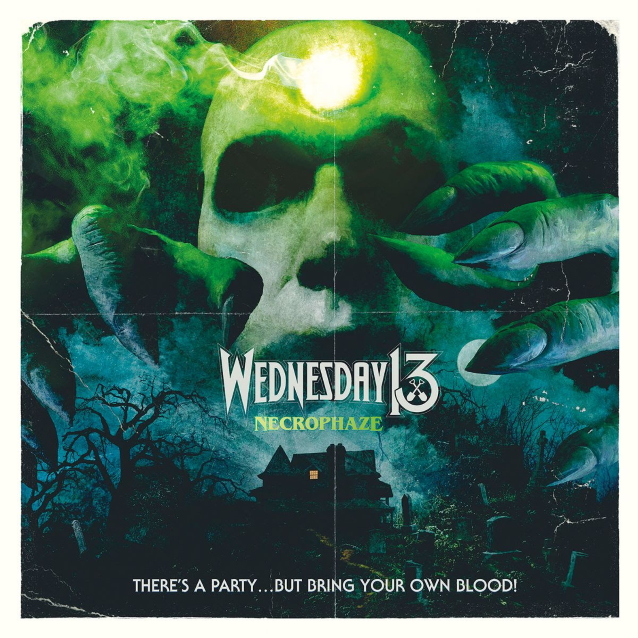 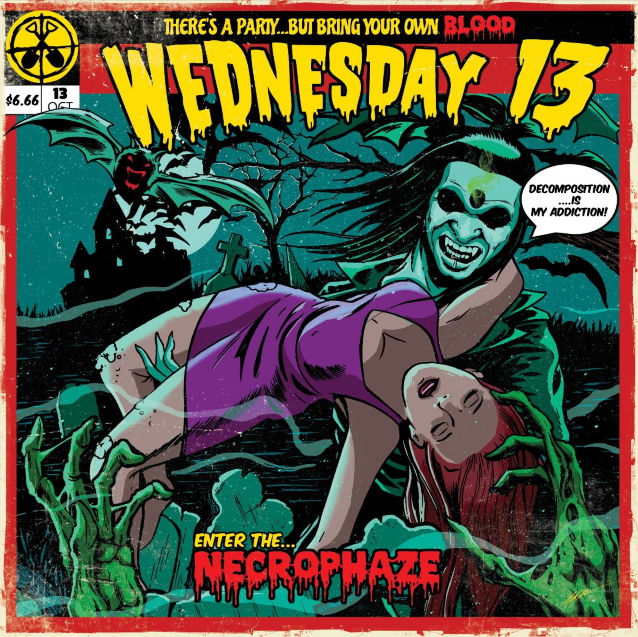