The two rock bands hitting the road starting this July and stopping in more than 20 cities throughout North America. Cities on the schedule include Boston, Toronto, Houston, Dallas, Pittsburgh, Detroit and many more. ALTER BRIDGE and SAINT ASONIA will join the trek as special guests. More information, including dates and venues, will be announced over the coming weeks.

Draiman told HardDrive Radio that he thinks this is the bill to beat this summer. “We’re looking forward to it tremendously,” he said. “Us, the boys in BREAKING BENJAMIN, ALTER BRIDGE, SAINT ASONIA — it’s stacked, and we’re very, very happy to have been able to put together such a powerful bill.”

Burnley added that the friendship among all four bands will go a long way. “We know the guys from the other bands too and, you know, when there’s respect and camaraderie like that, it no doubt like conveys to the crowd and just gives them the best experience and, you know, none of us would be here without the crowd, so it’s just gonna be an amazing experience for everybody,” he said.

DISTURBED kicked off its first headlining tour in four years on Wednesday night, February 10, in Fargo, North Dakota. Following this initial run, the band also has shows coming up with ROB ZOMBIE this spring.

DISTURBED is touring behind its sixth studio album, “Immortalized”, which became the band’s fifth effort in a row to debut at No. 1 on The Billboard 200 album chart.

BREAKING BENJAMIN returned in 2015 after a six-year absence with “Dark Before Dawn”, which also debuted at No. 1 and features the chart-topping rock radio hits “Failure” and “Angels Fall”. 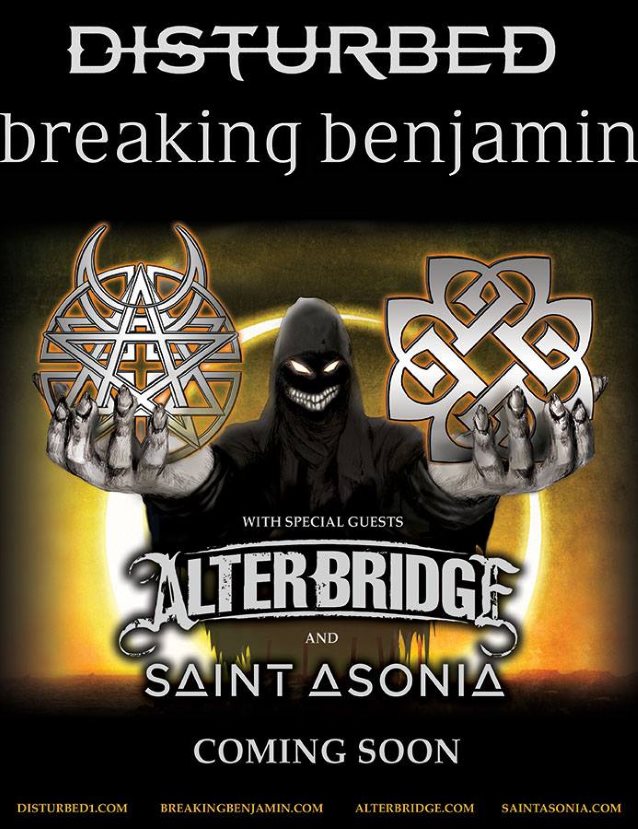