Southern California rock trio KYNG will release its new studio album, “Breathe In The Water”, on October 7 via Razor & Tie. Produced by Machine (LAMB OF GOD, CLUTCH), the disc was recorded at The Machine Shop Recording Studio in Austin, Texas and is the follow-up to 2014’s “Burn The Serum”. The album is available for pre-order now at iTunes, Amazon, Google Play and Merchnow.

“Breathe In The Water” is frontloaded with the type of impassioned vocals that erupt from the depths of the gut, unforgettable blues-soaked riffs, and pulverizing rhythmic clap. Driven by frontman/guitarist Eddie Veliz, the three-piece band also features drummer Pepe Clarke Magana and bassist Tony Castaneda. They take a no-nonsense approach to music: free of pretense, studio trickery and gimmicks. The result is a collection of songs that is real and raw, addressing themes of anger, loss and desperation. Original cover artwork by Conor Nolan reflects topics running throughout the album. Brian Blickle (BARONESS) and Zach Blair (RISE AGAINST) are guest collaborators.

“We were finally able to create a record that had zero stigmas to appease the industry. Every song on this record came from the depth of what KYNG truly is as a band. This album is far beyond anything that we have done in the past. Some of my best work resides in ‘Breathe In The Water’,” states Veliz.

“Breathe In The Water” track listing: 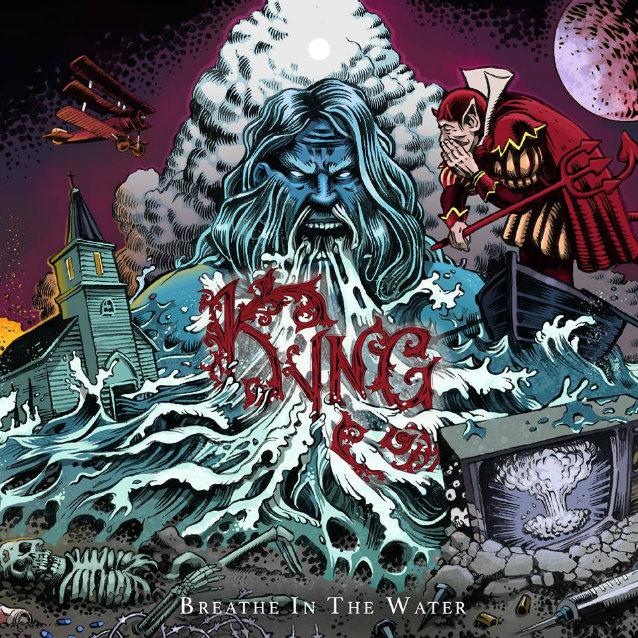