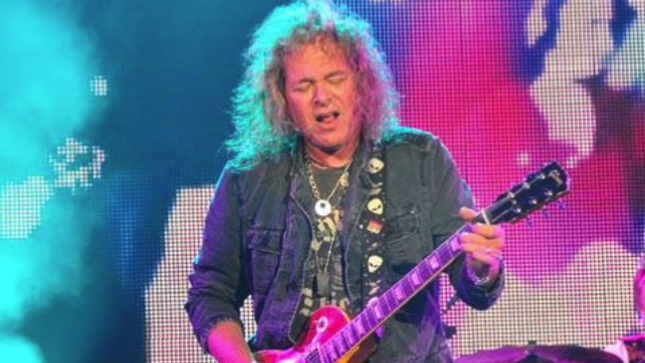 Currently on the road in Europe, legendary Bay Area rock band Y&T performed at the Z7 in Pratteln, Switzerland on September 18th. A five song recap of the show has been posted online; check it out below. The clip features the following songs:

Y&T are in Europe and the UK for 32 shows over two straight months. Frontman Dave Menikettit released the following statement before the tour:

“We know the fans are always asking us to play tunes that we haven’t always had the opportunity to play for years; so we decided to work on some cool gems from Y&T’s deep catalog of songs to make certain we give you a special and different show from previous years. Because we took some time off this summer, we are especially energized and excited to bring that special Y&T energy, passion, and enjoyment to every single one of these shows. Please come join us–especially now, as the world need the positive energy that we can all make happen together. See you very soon!”

Remaining dates are as follows:

Leonard Haze, original drummer for Y&T, passed away on September 11th, 2016, at his home in Hayward. He was 61 years old. Everyone in the Y&T camp is saddened by the recent loss of Leonard Haze. As the band was overseas about to start their European tour, they received the news of Leonard’s passing. Starting with the first show, Dave Meniketti has dedicated this tour to Leonard.

Dave Meniketti has issued the following:

“My friend and Y&T brother, Leonard Haze, passed away in his sleep on September 11. It was a shock to all of us, even though we knew he was not in the best of health the past few years. Leonard had been struggling with COPD for quite some time, and he dealt with his disease while still managing to play a few gigs every so often, with the help of an oxygen tank always nearby. COPD is not normally a disease you get better with, but sometimes it can be managed, to some degree. Unfortunately, he had recently been diagnosed with Stage IV as the disease had progressed.

“I last saw Leonard when he jammed with Joey Alves and the rest of the current Y&T lineup at the Fillmore show on April 2 of this year. He had also jammed with us at the Fillmore the year prior, and the fans loved every minute of it. He’d told me that playing with Y&T at the Fillmore was a “Bucket List” item he could cross off, and we did it 2 years in a row. Now, more than ever, am I glad that we all had the opportunity to play together for one more time on stage, just a few short months before his passing.

“Leonard was responsible for creating a drum sound that helped the band be distinctive at a time when no one else was playing that style in that way. His “Thunderfoot” single kick fast bass drum style ended up influencing many artists and fans across the world. Together, Leonard, Phil, Joey, and I created some amazing music to start Y&T off in a direction that the band continues to represent to this day.

“Our video documentary producers have tons of recent interview footage of Leonard that they have been working with every day, and he will, along with Phil Kennemore, be faithfully represented in the film, which is now even more important than ever.

“I will miss his crazy, nutty intensity, and the funny wit and spirit that was truly his own. As this European tour progresses, I dedicate every show to Leonard, and he will always be a major thread woven into the fabric of this 42-year career that is Y&T.” 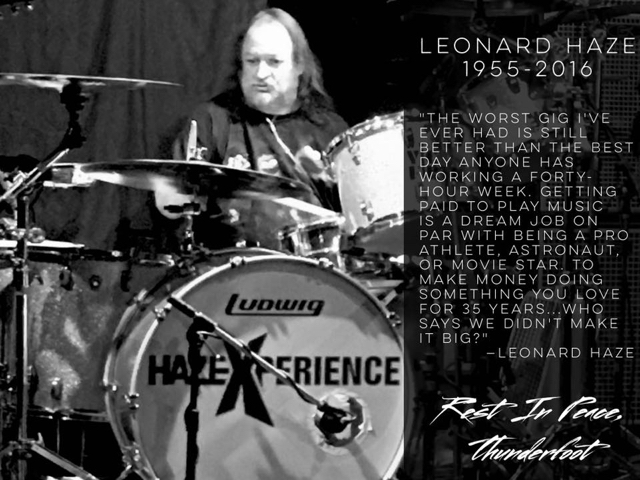 A Very Special Mystic Weekend – Come celebrate the huge life of Leonard Haze at this year’s Mystic Theatre weekend (November 18th – 19th in Petaluma, CA). Leonard’s band, the HazeXperience, will honor their founder and the music he created with them at this year’s Y&T Mystic shows. This weekend of shows always sells out, so be sure to get your tickets while they’re still available for these extra special shows.