German/Dutch symphonic metallers XANDRIA will return to North America for a headline tour this May. Support on the trek will come from KOBRA AND THE LOTUS and ONCE HUMAN. The tour kicks off May 9 in New York and runs through May 30 in Mesa, Arizona.

XANDRIA said in a statement: “We are super excited to go on our first-ever North American headline tour in May, playing East to West Coast, along with the wonderful KOBRA AND THE LOTUS as well as ONCE HUMAN. Let’s get these places rocked!”

XANDRIA‘s latest album, “Theater Of Dimensions”, was released on January 27 via Napalm Records.

Commented the band: “After the release of ‘Sacrificium’, we embarked on our longest tour so far. Over 150 shows that took us around the globe. Through so many different countries and diverse cultures. Through so many different, yet inspiring dimensions. We brought back plenty of memories, sometimes just bits and pieces, but those stuck to our heads. And it made us see who we are and where we wanted to take our music. Made us fearless. Made us push our boundaries once more. Made us cross some so-called genre defining borders. Made us bundle all our trademarks and take them to the next level. All this makes the most colorful XANDRIA album so far. It contains our most heavy and most emotional moments. Again, producer Joost Van Den Broek did a phenomenal job capturing the atmosphere down to every detail. ‘A Theater of musical Dimensions.'”

“Theater Of Dimensions” is described in a press release as “a hyper-emotional affair — and a very heavy one too, naturally. High-class guest vocals can be heard by mighty Henning Basse (FIREWIND), Zaher Zorgati (MYRATH), Björn Strid (SOILWORK) and Ross Thompson (VAN CANTO). There is a soundtrack-like, orchestral finesse inherent to the compositions, echoed by pounding groove and sophisticated shredding. Folklore and ballad chime in (‘Forsaken Love’), heavy thrash rears its ugly head (‘We Are Murderers (We All)’), and overall there is no doubt: XANDRIA are not only fearless, they are at their most entertaining and thrilling!”

XANDRIA in 2013 parted ways with their singer of three years, Manuela Kraller, and replaced her with Dutch vocalist Dianne Van Giersbergen, who also fronts the progressive metal outfit EX LIBRIS.

Dianne Van Giersbergen made her live debut with XANDRIA at the end of November 2013 on a Spanish tour.

Speaking about XANDRIA‘s songwriting approach, Dianne Van Giersbergen told Metalheads Forever: “I think diversity is a good thing though it should never be used when only based on a commercial purpose. It is most important to create what you yourself would love and what is pure to your heart, close to who you are. If you lose that then the music detached from both band and musician and will cause the fans to not believe the music and performance anymore.” 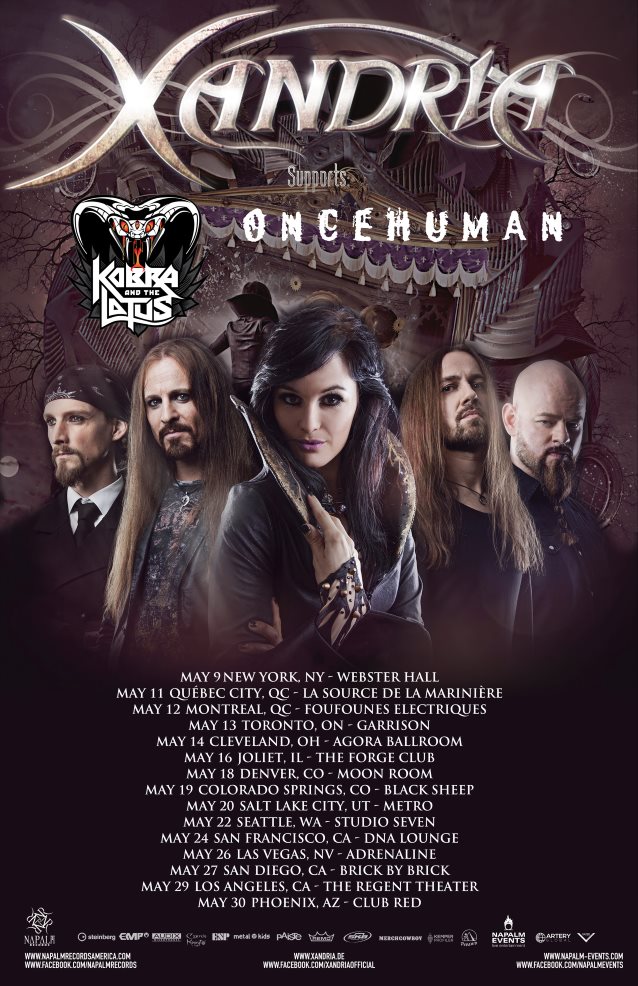