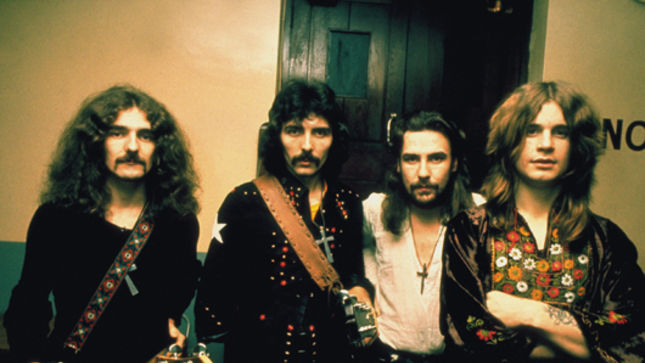 Writer, journalist and musician Joel Gausten has posted the following tribute to Black Sabbath, who celebrate their 45th anniversary today:

“February 13th, 1970. With heavy rain and a crack of thunder, everything changed.

On this day 45 years ago, four young men from the post-war streets of Birmingham, England released their debut album and created a new genre in only 38 minutes. Every band, every album, every note that has ever been called ‘Metal’ can be traced back to the sounds on this album. This is an indisputable fact. Career paths were decided, lives were dramatically altered (and perhaps even saved) and a new style of music was unleashed on the world because of this thing.

What Ozzy, Tony, Geezer and Bill built on this album – and on the seven records that followed – will never be bettered by anyone else. Why? Because these four people put their very souls into the grooves on those records. From crying out against the horrors of battle and the atrocities committed against our beleaguered veterans (‘War Pigs’ off Paranoid) to shining a light on the often-ignored struggles of the working class (‘Killing Yourself To Live’ off Sabbath Bloody Sabbath), Sabbath gave a voice to those who needed it most. They stood on some of the biggest stages in the world, but these four men always stayed close to the streets – where humanity’s heart beats the loudest. Black Sabbath showed many that genuine strength and growth could come from facing – and overcoming – the dark side. They offered catharsis through distortion, an escape through intense songs that were cries for peace in a world gone mad. And it all started when a young man first responded to this chaos with one question: ‘What is this that stands before me?'”