Fan-filmed video footage of MISFITS‘ June 29 concert at Banc Of California Stadium in Los Angeles, California can be seen below.

Glenn Danzig recently said that the MISFITS “are not gonna do many more” reunion shows.

The initial comeback performance by MISFITS members Danzig, Jerry Only and Doyle Wolfgang Von Frankenstein took place at the 2016 Riot Fest. The estranged bandmates played together for the first time since 1983 and were backed by former SLAYER drummer Dave Lombardo and guitarist Acey Slade.

Since then, the original lineup of the MISFITS has reunited for scattered dates, with the next one scheduled for August 17, when the group is slated to play the Psycho Las Vegas festival in Las Vegas, Nevada (replacing MEGADETH, who had to drop off following Dave Mustaine‘s throat cancer diagnosis).

When asked about by Full Metal Jackie about the selective nature of MISFITS reunion shows, Danzig replied: “Well, I don’t tour anymore anyway. Maybe I’ll put together like a week or two shows here on the West Coast, or maybe on the East Coast and that’s it.

“With the MISFITS thing, we just kind of got back together and just decided we’d do it here or there, and just not make it a grind kind of tour,” he continued. “We just want to make each event special. We’re not gonna do many more. I know we just announced Seattle and Denver, but I’m pretty sure there’s not gonna be many more of them. So people should see it while they can because I know next year I go out with DANZIG again for Europe and may do some dates here in the States. I gotta do a ‘Danzig Sings Elvis’ thing — select shows maybe around the country. Those will be more special. There’s no seating. It’s all tables. It’s gonna be a very cool kind of old-school vibe. This year I’ve got some time off in between working on the movie, so we decided to do a couple extra shows. Then, that’ll be it I think for a while.”

Legal papers recently uncovered by MetalSucks have suggested that Danzig only reunited with the MISFITS to end his decades-long legal battle over the band’s trademark and profits.

Prior to the Riot Fest concerts, Glenn, Jerry and Doyle Wolfgang Von Frankenstein last performed together on October 29, 1983.

The original MISFITS band broke up in 1983, and Only brought forth a new version of the MISFITS in 1995. Various members have come and gone, but Only, along with BLACK FLAG‘s Dez Cadena, has kept some form of the MISFITS in the recording studio and on the road for most of the last two and half decades. 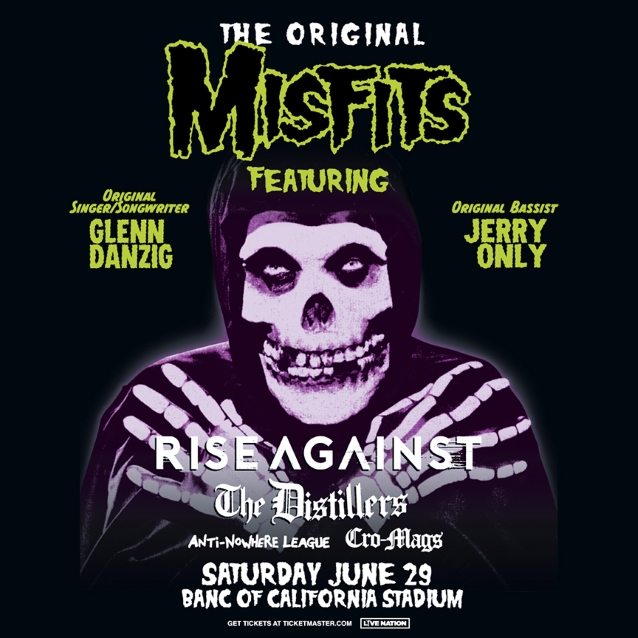 This is a digital asset produced by the office of Hesh One in San Diego, California for a client.