Mark Dean of Antihero Magazine recently conducted an interview with VIXEN frontwoman Janet Gardner. An excerpt from the chat follows below.

Antihero Magazine: You seemed to have taken a break from the music industry for quite a while. Obviously, you trained in a separate career. I just wondered if you saw in advance the changes in the way the music business was going and you decided to get out at that time.

Janet Gardner: “Not really. There was… I did sort of… Obviously, in the early ’90s and most of the ’90s, we were looked as passé, the whole scene that we were involved in. So, you know, it wasn’t very appealing to throw yourself out there and get people going, ‘Eww, we don’t want to hear that.’ So, you know, it was kind of a good time for me to, you know, do the family thing. And do other things that were important to me at the time and spend some time with my family. And you know, I would always sit down with a guitar. I always had things to say, but it wasn’t necessarily what people wanted to hear. So, I wanted to spend some time doing other things in life.”

Antihero Magazine: How do you view on reflection the “Tangerine” album, because it was a bit of a change of sound for VIXEN? A complete departure from the sound of the first two albums.

Janet Gardner: “Well, yeah. I mean, during that time, I really was listening to a lot. I loved and still love STONE TEMPLE PILOTS and SOUNDGARDEN and some of those bands at that time. So yeah, there was probably a little bit of influence from those bands and you know, along with my roots, which are definitely in the ’70s. AEROSMITH and AC/DC and LED ZEPPELIN. I mean, those were the bands that truly are rooted in my soul. So, you know, those will always be there, and as you go along, you hear other things that you like. It kind of has an effect on you. So really some of that came out on that album, and also a lot of the lyric content was obviously much darker than the happy ’80s stuff that we did in VIXEN. And that was just from life experience. You know, it’s got to go somewhere, so that’s where it came out.”

Antihero Magazine: I watched [VIXEN‘s 2004 appearance on VH1‘s “Bands Reunited”]. Do you feel, again looking back did that put unnecessary pressure on you all or is it something that you think might have happened anyway?

Janet Gardner: “That definitely would have happened anyway. Bands, the whole dynamic of bands is very, very volatile. In any band. It just is. Everyone is passionate about what they’re doing and everyone has their own feelings on what it should be and what it shouldn’t be. It’s tough for bands to stay together tight. And you see bands go through it all the time. Members change and alliances changed and people’s feelings about things change. So, I mean, yeah. I think we were destined to come full circle and come back together anyway. So, no, I don’t think it was a lot of pressure. I think everybody was really happy to see each other and hang out and reminisce, and it was fun. You know, I think for the drama purposes of that particular show, they kind of focused on a few little awkward moments. I’m like, ‘Okay, here we are. Now what do we do?'”

Lightning and Leslie made their live debut with VIXEN on March 25 at the Rock The Arena II festival at Savage Arena in Toledo, Ohio.

Stile originally played with VIXEN in 1997-1998 and returned to the band in 2013 as the replacement for the group’s deceased founding guitarist Jan Kuehnemund. 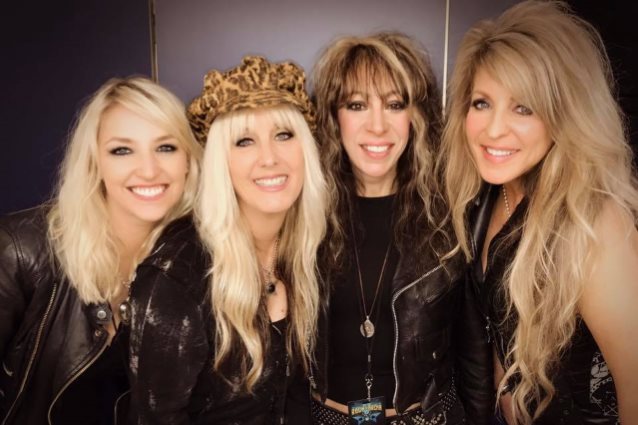