Fan-filmed video footage of DIRKSCHNEIDER, the band fronted by former ACCEPT and current U.D.O. singer Udo Dirkschneider, performing on January 11 at Agora in Cleveland, Ohio can be seen below.

Speaking about the decision to extend the DIRKSCHNEIDER “Back To The Roots – Farewell To Accept” tour, during which he is playing classic ACCEPT songs for the last time, Udo told rock journalist Mitch Lafon of the “One On One With Mitch Lafon” podcast (Facebook page): “Now we’re on tour until the beginning of February, and then we make a short break and then we start working on the new U.D.O. album. But, over the summer — I mean, it takes a while before the album is coming out — so we had a lot of… people wanna have us back on festivals in the summer in Europe, so we said, okay, why not? So [instead of sitting at] home, let’s do it. And that’s the plan, at the moment, for 2017. And you never know what’s coming up. [Laughs]”

Asked if it’s possible that the “Back To The Roots” tour will continue through the end of 2017, Udo said: “I don’t know. We will see. I mean, never say never. I mean, as long as people are really interested in this, [for us] to do this, why not? It’s not a problem. We can come up every minute with U.D.O.; it’s not a problem for us. So if there is interest, and it looks like there’s a big interest in the DIRKSCHNEIDER thing… If we do it, yeah, [and] if not [shrugs his shoulders].”

Udo told Lafon in a previous interview that his decision to perform classic songs from ACCEPT for the last time under the DIRKSCHNEIDER banner was the result of his desire to focus on the U.D.O. material on future tours. He explained: “A lot of people ask me, ‘Why do you do this?’ And I said… Always people are asking, ‘Oh, can you play this ACCEPT song and this ACCEPT song and this ACCEPT song?’ I mean, I have fifteen U.D.O. albums out, and, for me now, U.D.O. is U.D.O. Of course, I know that the people like to hear ACCEPT songs with my voice, but I wanna close something — I wanna close, like a book, and say, ‘Okay, that’s it. I read it.’ Sometimes you have to come to an end with something. I wanna close up everything with ACCEPT. And this will be the last time. And I said, okay, I’ll do one more tour. It will be a world tour. And yeah, that will be the last time that you… When we are on tour with U.D.O., we’ll never play any ACCEPT songs again.”

DIRKSCHNEIDER released a live album called “Live – Back To The Roots” on October 28, 2016 via AFM Records. The effort, which was recorded on April 2, 2016 at Kaminwerk in Memmingen, Germany, was made available as two-CD digipak and gatefold three-vinyl in four different colors (black, gold, silver and clear). 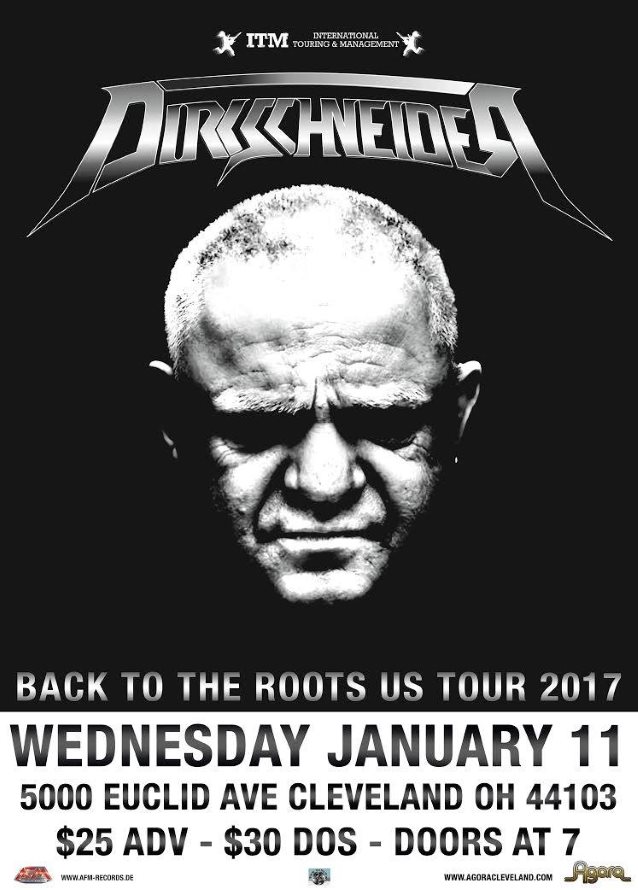