Fan-filmed video footage of SLASH FEATURING MYLES KENNEDY AND THE CONSPIRATORS‘ September 13 concert at the Whisky A Go Go in West Hollywood, California can be seen below. The show took place just two days after the band performed exclusively for SiriusXM listeners at the same venue.

The setlist for the September 13 concert was as follows:

In a recent interview with the New York radio station Q104.3, Slash stated about which songs planned to perform live during his tour with Kennedy and THE CONSPIRATORS: “When we first started out in 2010, I just had the solo album [‘Slash’] with all the different singers on it, so at that point, we did songs off of that record and a lot of GUNS N’ ROSES stuff which I hadn’t played in years, and then some VELVET REVOLVER and some [SLASH’S] SNAKEPIT [material]. We did that, and then we recorded ‘Apocalyptic Love’, so we had a little bit more original material, but we kept doing the GUNS stuff and VELVET REVOLVER and so on. ‘World On Fire’, at that point, we had a pretty good catalog of our own stuff, but I was still digging playing ‘Welcome To The Jungle’ and whatnot. Then I hook up with GUNS N’ ROSES, so now, I’ve played all those songs for the last two years, so I’m sort of like, ‘Okay, we don’t have to do any more GUNS N’ ROSES songs.’ We have enough to do.”

The first single from “Living The Dream”, a song called “Driving Rain”, was released in late July. Slash said about the song: “This is a riff I specifically remember playing with the guys for the first time at a venue in New Hampshire on the ‘World On Fire’ tour. It’s a cool guitar part we ran though, and from that point forward the rest of the song started to come together in my mind while on the road. We put it all together this year and Myles came up with a great melody for it.”

Kennedy added: “Lyrically, it’s a story about somebody who works on the road — it could be a musician, and it could be a traveling salesman. What makes it interesting is this guy has an addict girlfriend or spouse who continues to relapse, and she ends up getting him to come home. She’s miserable and falls back into bad old habits, and that compels him to head back to her to save the day.” 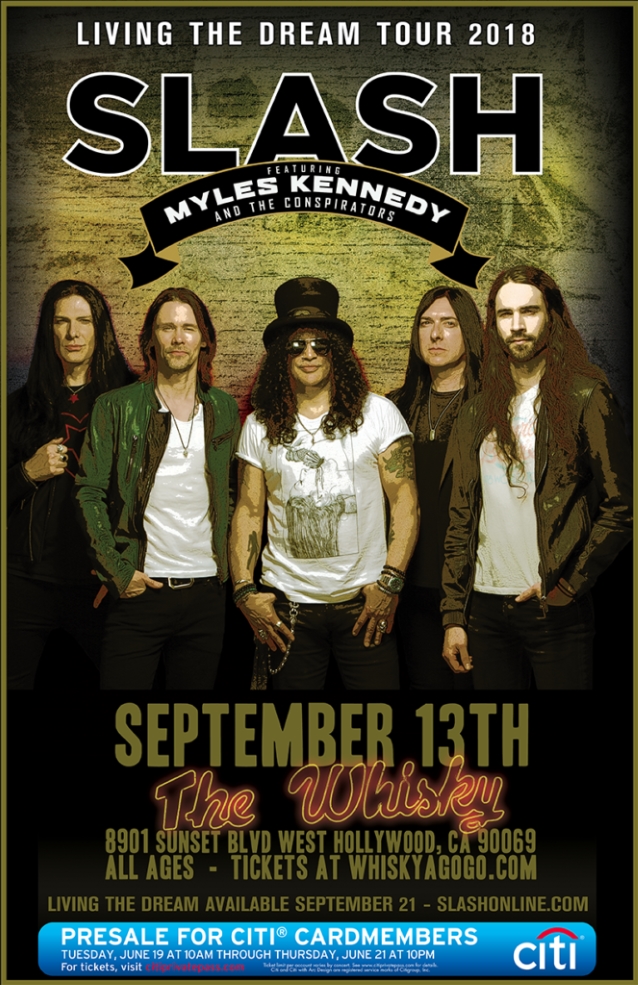