This past Sunday (May 17), seven AT-6 Texans of the Condor Squadron soared above Los Encinos State Historic Park in Encino, California in remembrance of legendary heavy metal singer Ronnie James Dio on the fifth anniversary of his death. Video footage of the flyover can be seen below.

The Condor Squadron was established 50 years ago by a group of World War II fighter pilots at Van Nuys Airport to preserve the memory of those who served. Their mission is “to honor military aviation through flight, exhibition, and remembrance.” The organization and its members own and fly these historic plans at civic events throughout the country.

A memorable weekend of festivities honoring Ronnie James Dio concluded Sunday with a motorcycle rally, barbecue and all-star concert. Bikers kicked the day off by making the ride from Glendale to Encino, California, where many of the day’s events took place in Los Encinos Park. Lita Ford, Sean McNabb and Ronnie‘s widow, Wendy Dio, were among the riders.

Dio, a member of DIO, HEAVEN & HELL, BLACK SABBATH and RAINBOW, passed away five years ago this past weekend. The memorial service was free and open to the public.

The vendors at the park donated all of their proceeds to the Ronnie James Dio Stand Up And Shout Cancer Fund. A giant screen on stage showed footage of Dio performing between acts.

An auction benefiting Stand Up And Shout with personal items of Dio‘s was held, featuring his guitar with signatures of some of the weekend’s performers.

Between the guitar and a photo book alone, more than $8,000 was raised. 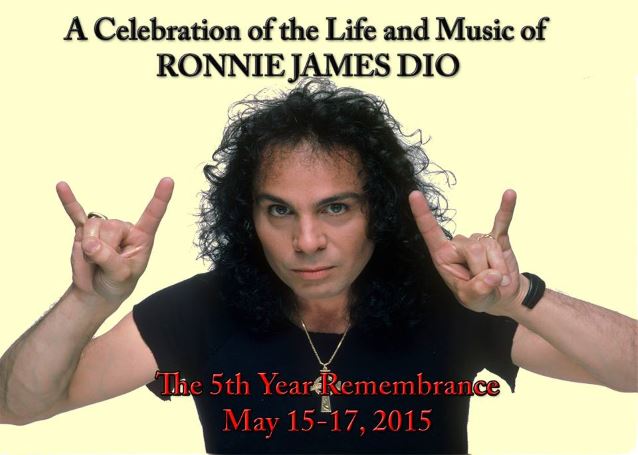