KISS kicked off its “Freedom To Rock” tour last night (Monday, July 4) with a 16-song set in Tucson, Arizona

“Tonight’s the first night of the tour, and it couldn’t be any place hotter or any place cooler,” KISS frontman Paul Stanley told the crowd at the AVA Amphitheater as they braved 102-degree heat.

As part of the set, KISS honored the military by having a veteran, Lt. Col. Mellorya Crawford, an 18-year Army veteran stationed the last six years at Fort Huachuca, join the band’s road crew for the night.

“It’s not the politicians that make the country great, it’s the military,” Stanley stated. “Politicians make promises. The military delivers.”

Prior to the show, Crawford released a written statement in which she said: “I’m excited to represent other female veterans across the world. I’m looking forward to working with KISS during their first stop [of the ‘Freedom To Rock’ tour]. It will be amazing to actually meet them. I can remember listening to their music growing up and seeing their characters on ‘Scooby Doo’.”

KISS‘s setlist for the Tucson concert:

The “Freedom To Rock” tour will hit 40 cities through the summer — many of them places that the band has either never played or hasn’t played in years.

“The way I look at it, you’ve got to take stock sometimes and look back to where you started,” KISS bassist/vocalist Gene Simmons said in a recent interview. “I mean, I still visit my mom’s house. You need to go back to the beginning sometimes.

“When we first started, we went to places like Mankato (Minnesota), Ypsilanti (Michigan), Fort Wayne (Indiana) and Huntington. Guess what? Cool people live in all kinds of places. And when we first started, we took our cause to the people. We were out there on the road in all of these places before we could get to them on MTV and on the internet before of all that. So, we asked ourselves why don’t we go out and play some of the cities we don’t normally play.” 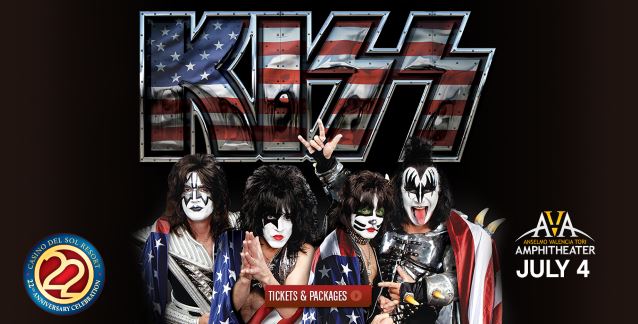