Video footage of DOKKEN performing the song “Alone Again” on April 15 at the Whisky A Go Go in West Hollywood, California can be seen below (clip filmed by Jake Perry).

Former DOKKEN and current FOREIGNER bassist Jeff Pilson recently told rock journalist Mitch Lafon about the possibility of a reunion of DOKKEN‘s classic lineup, featuring Pilson, vocalist Don Dokken, guitarist George Lynch and drummer Mick Brown: “We’re actually working really hard to try and pull something together right now. It has to fall in spaces where there is time off [from my gig with FOREIGNER], so I don’t know for sure whether it’s gonna happen. So let’s just say we’re all friendly now, we’re all past all the decades-old crap, and we all talk and everything’s great. Now it really is just down to scheduling and trying to figure it out. Because, you know, you’ve gotta do it right, if you’re gonna do it. We all feel that way.”

He continued: “I think we’ve all come to a place where we’re very appreciative of the legacy that DOKKEN has, and we would never wanna just do something for the money and take advantage… ‘Cause we get offered a lot of things quite often, and if we wanted to do it that way, we could. But the fact that we don’t, I think, is a great sign. I think when we do finally do something, we’re gonna try and do it right. Although I don’t know if we’re gonna ever get to do the big sweeping tour that we’ve talked about — mostly because of the FOREIGNER commitment — but we’re gonna try and do something. So hopefully I’ll have something to report sometime soon.”

Asked what would be the “right way” for a DOKKEN reunion to happen, Pilson said: “I think, really, to do it right means that when we go out there, we sound good — no matter how many or few shows we do, no matter… new music or old music. I would love to record some new music with DOKKEN; I would love that. I just don’t know if we can or will. I have a sense that sometime we will, somehow, but we’ll see. Again, it’s just down to quality. Doing it right means doing it with quality. ‘Cause we were always very quality conscious back in the day, and I don’t think any of us wanna let that go now.”

Regarding the current relationship between the members of the DOKKEN classic lineup, Pilson said: “No matter how argumentative a band is, no matter how much… I mean, think of all the time we spent together, think of what we accomplished together… I don’t care what anybody says; we all love each other — we really do. There is a love in there that’s… I mean, sometimes it’s two siblings that love and hate at the same time, but there is a lot of love there. So I’m very glad that when I get an e-mail from Don, I’m not [going], ‘Oh, God.’ I’m excited to read it. George and I have been close for a long time, so that hasn’t been an issue for a while. But, yeah, it feels really good.”

He added: “We shared something very special together. I think we’re all at the point in life where we kind of appreciate it now. And if we ever get a chance to do some more with it, I think… It would be very interesting, because we’ve never been in a situation where there wasn’t animosity, so I don’t know. [Laughs] Maybe it won’t work. I don’t know. [Laughs]”

Don and Lynch appeared on VH1 Classic‘s “That Metal Show” together back in May of 2010 in hopes that a reunion of DOKKEN‘s classic linep would follow. Despite their efforts, the reunion never happened and Don went forward with DOKKEN‘s current lineup.

All the members of DOKKEN‘s classic 1980s lineup reunited on stage for the first time in more than a decade on November 29, 2009 at the House of Blues in Anaheim, California. Don Dokken appeared on stage and said he had some friends he wanted to introduce. Pilson and Lynch joined Mick Brown for a two-song encore of “When Heaven Comes Down” and “In My Dreams”. 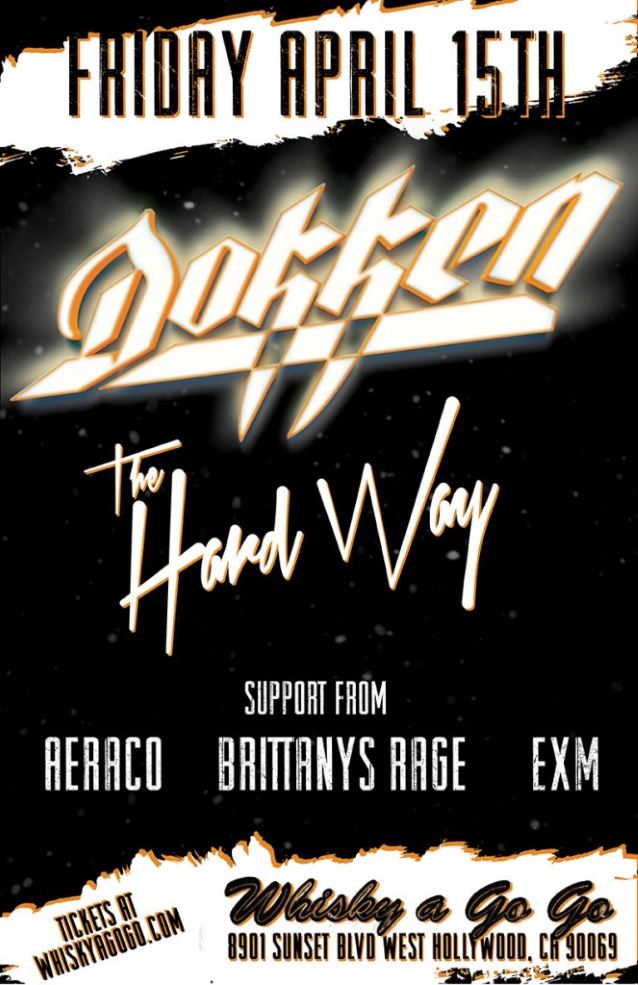