California deathcore masters SUICIDE SILENCE will release their new, self-titled album on February 24 via Nuclear Blast Entertainment. The CD was produced by Ross Robinson, who has previously worked with KORN, SLIPKNOT, LIMP BIZKIT and SEPULTURA, among others, and was mixed by Joe Barresi (KYUSS, MELVINS, TOOL, QUEENS OF THE STONE AGE).

Speaking about the recording process for SUICIDE SILENCE‘s new CD, vocalist Hernan “Eddie” Hermida told Revolver magazine: “Well, working with Ross was a delight. As many people like to talk on the Internet that he’s not a delight, I will tell you firsthand, a coffee in the morning and a little bit of soul searching in the afternoon is never a bad cup of tea.”

Added guitarist Mark Heylmun: “But, on the other end, Dan Kenny, our bass player, was just talking about recording with Ross with Dino [Cazares] from FEAR FACTORY, who… they’ve been around together forever. And Dan was, like, ‘I’m not gonna lie. If we record another record with Ross, I’m scared, because I know what he’ll get out of me.’ ‘Cause he’ll get everything… Whatever it is that is inside you he’ll get out, and it’s always for the better. And the best pieces of art and the best creations come from pain and from honest things that you need to fucking get out. But it was fucking amazing… [And] Joe Barresi mixed it, so that’s fucking awesome. [He was] sick to work with. [he] fucking dealt with us while were on tour, sending us mixes, and we were listening to all of it.”

On the topic of the musical direction of SUICIDE SILENCE‘s new album, Heylmun said: “It’s going to completely change everything you probably ever will think, and have thought, or ever will fucking feel about SUICIDE SILENCE.”

Added Hermida: “The best way I’ve described it is, take a bullet train — one of those Japanese bullet trains — that goes, like, three hundred miles an hour, and then turn the steering wheel as fast you can, and there we are. And whatever comes up is whatever comes up; we’re not worried about it. We’re just here to have you guys listen to what we believe is good music for ourselves, for our lives, for our souls.”

Heylmun previously told Wall Of Sound that SUICIDE SILENCE‘s intention was “to try everything” while making the new album. He explained: “If there is an idea, try it. Don’t be afraid, you know? Don’t let the fear of trying something different stop you from opening up a can that might be the… exact soup you wanna taste, I don’t know. [Laughs]”

“We always want to work together to encourage everyone to be the best that they can be. So that’s especially where we’re at, having gone through a lot, and having a new member come in and having to rebuild that whole camaraderie of being creative. We’re all just trying to give to the music, and give to each other and give, give, give, give, give. Because we gotta get shit out and give this fucking music, this fiery piece of nothing, this magical thing that doesn’t even exist until we create it. Just throw down and give it all you can and encourage each other to give all you can and encourage each other to give it everything you possibly can. So that’s what the new record is going to be like.”

“You Can’t Stop Me”, SUICIDE SILENCE‘s first album to feature Hermida, was released in July 2014 via Nuclear Blast Entertainment. 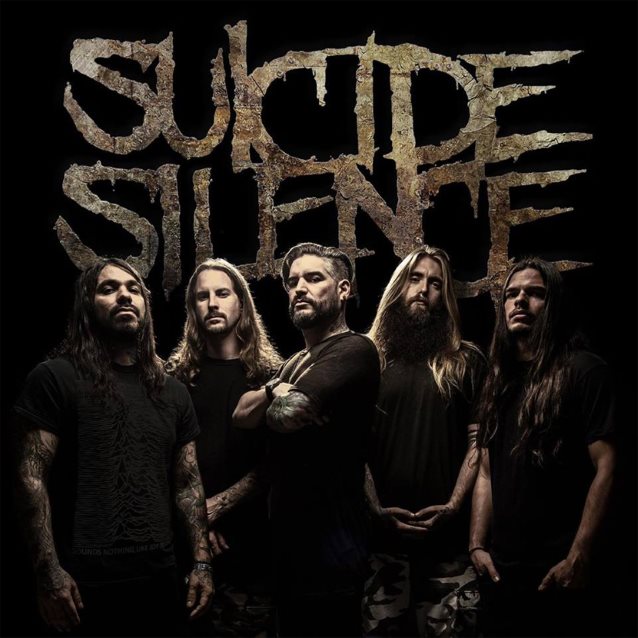