One of the most acclaimed albums in the history of the “deathcore” genre is, without question, SUICIDE SILENCE‘s debut offering, “The Cleansing”. Originally released on September 18, 2007, the LP debuted at No. 94 on the Billboard 200 chart and positioned the band as the leaders of this new movement.

SUICIDE SILENCE will officially commemorate “The Cleansing”‘s tenth anniversary release by embarking on a lengthy North American tour during which it will perform the album is its entirety every night. Support on the trek will come from UPON A BURNING BODY, WINDS OF PLAGUE (December 12-17 only), SLAUGHTER TO PREVAIL and PRISON. It kicks off November 7 in Oakland, California and wraps up December 17 in Hollywood, California.

SUICIDE SILENCE guitarist Mark Heylmun states: “Ten fucking years!! ‘The Cleansing’ was a record we wrote when most of us were in our early twenties. I was in my teens still! My, has the time flown by. All we knew back then was we wanted to offend people and piss in the face of the mainstream (DYING FETUS pun intended).

“We’ve wanted to do a commemorative tour for this record for years now and the time has come.

“‘The Cleansing’ broke us into the metal world and the record came from a very special place, a fresh place, a place that words fail when I try to describe it, and without it… well, we wouldn’t be here attempting to describe it.

“Mitch [Lucker, late SUICIDE SILENCE singer] had a vision for this record; he wanted to set a standard for our scene and, in my eyes, he created much, much more.

“Since [Mitch‘s] passing, Eddie [Hernan Hermida, current SUICIDE SILENCE frontman] has paid homage to Mitch‘s vocals on this record every night. It’s something very close to our hearts to have Eddie singing these songs with us.

“Mitch and Eddie inspired each other, exchanged vocal tips, and both have the passion for the most brutal sounds you can humanly make, and it’s going to be an amazing show for us and for you. Emotions will be high; maybe we will be high too.

“You don’t want to miss this. Let’s fucking party! Come celebrate with us, ’cause this will only happen once!”

SUICIDE SILENCE has spent the last few months touring in support of its controversial self-titled album, which saw the band take a noticeable change in direction from their traditional deathcore sound.

The uproar over the LP’s approach — featuring a more melodic and clean singing style, in the vein of acts like DEFTONES and KORN — even caused one disgruntled fan to launch a petition to stop the record coming out. 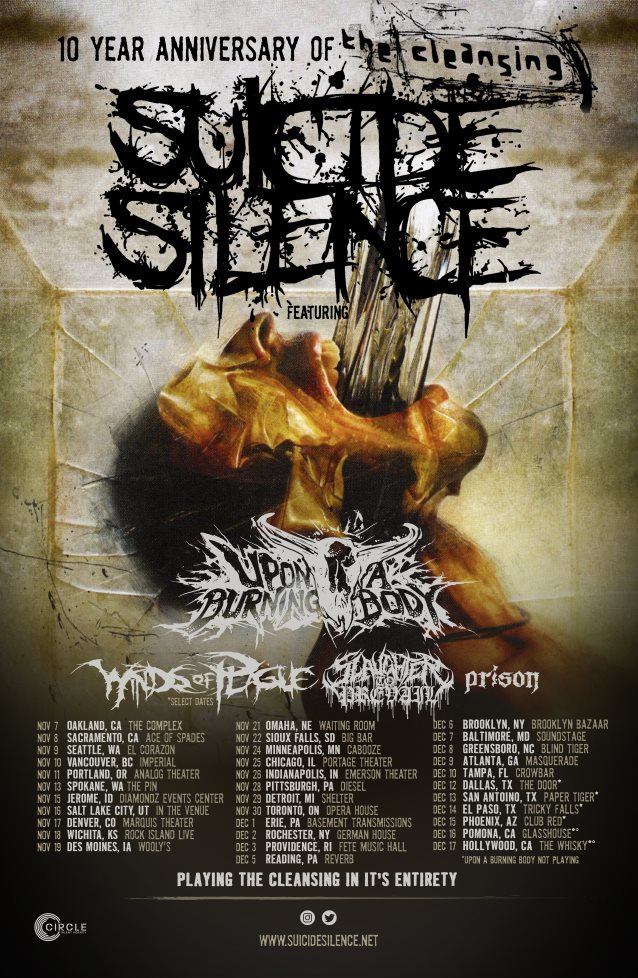