SUICIDAL TENDENCIES‘ free concert in Los Angeles was cut short yesterday afternoon (Sunday, June 4) after police pulled the plug on the performance less than half an hour into the set. According to ST drummer Dave Lombardo, the band “got to play four songs before the riot squad and helicopter aka Ghetto birds broke up the event,” apparently in response to some of the audience breaking through one of the security gates.

The concert was staged in connection with the unveiling of a mural of SUICIDAL TENDENCIES singer Mike Muir, who was being honored by councilmember José Huizar and Los Angeles-based artist Robert Vargas.

Located on Santa Fe Avenue in the Arts District, the Mike Muir mural is adjacent to the future 6th Street Bridge and park space. Councilmember Huizar worked with the City’s Department of Cultural Affairs to work with Robert Vargas, a prolific muralist whose work is displayed throughout the city, to paint a mural of Muir. Vargas is painting the mural freehand, without using stencils, projections or grids.

Great turnout for the unveiling of the Mike Muir mural in downtown Los Angeles SUICIDAL TENDENCIES – OFFICIAL got to play 4 songs before the riot squad and helicopter aka Ghetto birds broke up the event.
Monster Energy Music 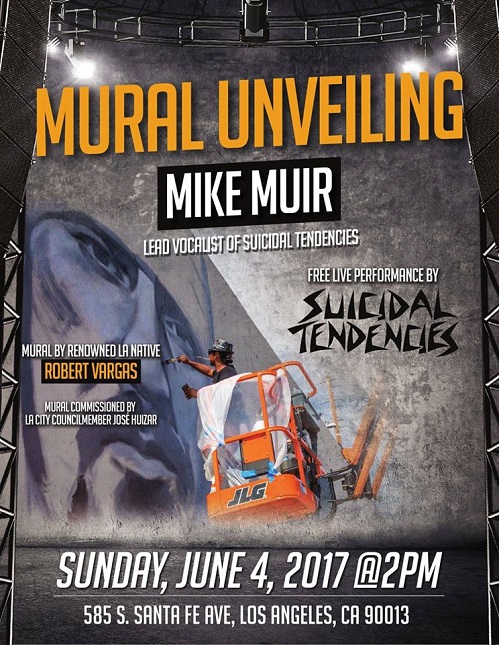