STONE TEMPLE PILOTS will reunite with singer Chester Bennington for a one-off performance at “From Bach To Rock”, a star-studded event to benefit Palos Verdes Peninsula public schools on March 26 at the Norris Theater and Pavilion in Rancho Palos Verdes, California.

“From Bach to Rock” is an intimate concert, bringing rock stars together with world-renowned classical musicians, taking you on a journey from 17th century to the modern hits of today, all in the spirit of benefiting Palos Verdes Peninsula public schools (proceeds to be donated to the Peninsula Education Foundation – PEF). The event will offer a one-of-a-kind concert, auction, and an epic red carpet after-concert party fit for any rock star. All musicians involved with the event are contributing their time, energy and musical talents in an effort to benefit public education by helping fund programming supported by PEF, including school music, physical education, library and STEM programs, safe school counselors, academic and career counselors, and teacher salaries.

STONE TEMPLE PILOTS and Bennington officially announced that they were parting ways in November. Bennington, who also sings in LINKIN PARK, said in a statement: “The last few years have been an amazing experience. I got to create and perform with one of the greatest rock bands of our generation, that had so much influence on me growing up. With the amount of time STP deserves, in addition to being in LINKIN PARK, and with the needs of my family, one of them always seems to fall short.”

Bennington continued: “The four of us… Robert [DeLeo, bass], Eric [Kretz, drums], Dean [DeLeo, guitar] and myself knew what we were up against. We decided in due fairness to friends, fans and the legacy of STP that it needs more than time was allowing me. And in all fairness to my bandmates in LINKIN PARK, as well as to myself and to my family, I’m going to focus solely on LINKIN PARK so I can contribute 100 percent.”

The DeLeos and Kretz said: “What an amazing and beautiful few years we’ve all had together. We have thoroughly enjoyed our time together with Chester not only professionally, but even more so on a personal level. Sadly, it was evident that scheduling and time was working against us. Within this, there is a new beginning. There is an abundance of new music written, some of which is already recorded.”

The bandmembers added: “We have had the fortune of playing with some very talented singers over the last few months and will continue to do so until each of us feels and knows when the right person arrives.”

Bennington joined STONE TEMPLE PILOTS in 2013, shortly after they fired Scott Weiland. He recorded one EP with the band, “High Rise”, and did a handful of tours. Dean DeLeo said at the time that Bennington was their first and only choice to replace Weiland. “We simply did not have a list of guys we were thinking of, we didn’t hold auditions, we thought of Chester and that was it,” he said. “It’s very interesting, honestly, because Chester told me a story that when he was dating his wife about nine years ago, he told her that one day he was gonna get a call from us to be the singer of this band.”

Bennington last performed with STONE TEMPLE PILOTS on October 25, 2015 at the Aftershock festival in California. 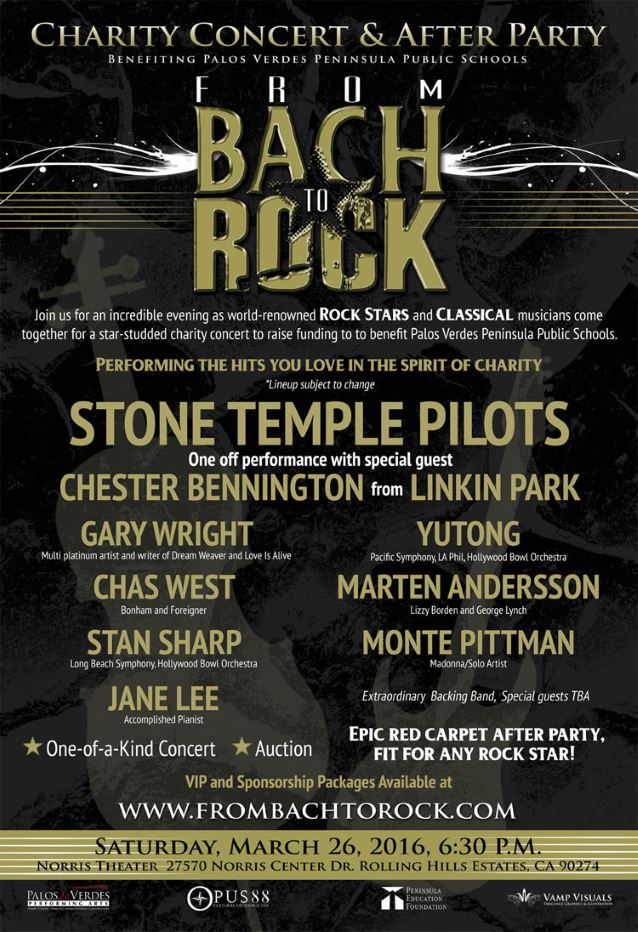