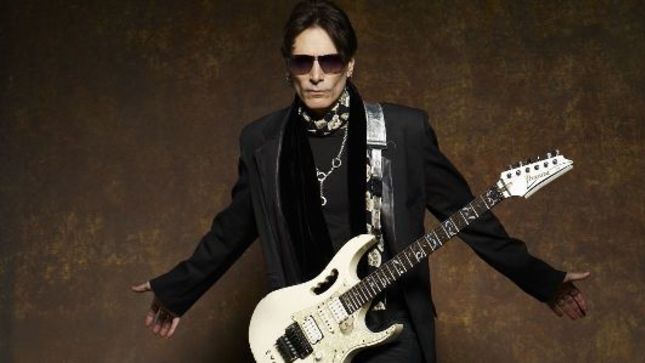 Guitar legend Steve Vai’s Passion And Warfare 25th Anniversary North American Tour kicks off next week and fans won’t want to miss this once-in-a-lifetime performance. Check out the teaser trailer below. Go to this location for all tour dates and ticket links.

Vai will be honored and inducted into The Long Island Music Hall of Fame on Thursday, November 3rd This is a special and meaningful award given to artists born and raised in Long Island, Brookyln, Queens, Nassau and Suffolk, New York. Info and tickets are available at this location.

The upcoming event will be the Long Island Music Hall of Fame’s sixth biennial gala since 2006 and may be the final one held outside of its museum, scheduled to open in Wyandanch in 2018. In previous galas, the Long Island Music Hall of Fame has inducted a wide range of the area’s musical legends from Billy Joel to Public Enemy, from Joan Jett to Salt N Pepa, from George Gershwin to Debbie Gibson.

In the clips below, Vai and Glow Living host Chandra Lynn discuss the Law of Attraction, managing your thoughts and emotions during the creative process, and he shares how to unlock your unique creative expression.

Vai recently announced Vai Academy 2017: Passion and Technique. He has checked in with the following update:

Vai has also posted a video trailer for Vai Academy 3.0:

The third incarnation of Vai Academy offers 4 days and nights of non stop guitar, start to finish, January 2nd – 6th, 2017 at the beautiful Asilomar Center, positioned in the oceanfront village of Carmel, California. Visit VaiAcademy.com to reserve your spot today.

From Steve: “Friends and fellow guitarists, welcome to the third year of Vai Academy. It feels great to say that! I’m so excited that this has been as successful as it’s been, and it seems to become more interesting every year. If you’re new to the program, we’re excited to meet you for the first time. If it’s your second or third year, thank you for coming back!

For 2017, we’ll be at the Asilomar Center in beautiful Carmel, CA January 2-6. It’s a great week because everyone’s ready to start the year fresh after the holidays. It doesn’t hurt to ask for admission as a holiday present either—just a suggestion!

We always pick a theme for this thing. I listened to you guys very closely this time around, and I’m doing something different for our Master Classes. This year, we’re going to focus on guitar technique. Many young guitarists always want to know things like: How do I bend notes properly? What’s the best way to approach vibrato? How do you pick so that you get the most out of what you’re trying to achieve? What does it feel like to play effortlessly in 11/16 timing? How does my intonation work into all of this? We’re all in need of guidance regarding these things: I know I still am occasionally!

At the same time, I’ll actually get a chance to go deeper than the technique portion. As you’re getting that part down, we’ll talk about finding inspiration within yourself to write melodies and songs. The technique is the tool. It’s your most useful friend to express what’s inside. Let’s unlock that together. As always, I’ve invited some friends to join me. We have one of my idols, the legendary Al Di Meola, and the wonderful Carlos Alomar—in addition to a few special guests which we’ll be announcing soon.

We’re starting with the technique as the foundation. What’s great is that will grow in whatever direction you personally want it to. Ultimately, the main goal of Vai Academy is for everybody in attendance to feel incredibly enthusiastic when thinking about their goals, their future, and connection to the instrument. You’ll hopefully leave with a few new buddies and maybe band mates too. I look forward to seeing everybody at Vai Academy 2017.”