Rob Cavuoto: You released a series of individual songs on your site, VaiTunes, what more can we expect to be released, possibly video?

Steve Vai: There is quite a bit of material I have in the vault! It ranges from simple to dense. There are recordings of me playing the accordion when I was 9 years old, to the first week I picked up the guitar all the way to things I did yesterday. It’s similar with all the video footage too. The stuff just needs to be tweaked. Some of it’s just ok, while others have great potential to be wonderful pieces.

Rob: Many artists are releasing three or four digital songs quarterly vs. an entire physical CD in order to stay in touch with their fans. Do you foresee yourself following this trend with your new material?

Steve Vai: That’s primarily what VaiTunes is about. For an artist such as myself, digital sales only make up about 40% of the total sales. It’s very difficult to release music in retail stores, so for now VaiTunes is a good way to get some instant gratification to some people.

Rob: What do you see as the benefits to releasing singles versus an entire CD?

Steve Vai: It’s much easier to record one song instead of twelve! I like the idea of singles, but a full record takes you on an adventure and gives you emotional depth of field. You can have a richer experience as a listener and more creative experience as an artist when you have a full album to work with. They both have their advantages.

Rob: Do you have any plans to release an album solely on VaiTunes?

Steve Vai: Eventually, but most new recordings for some artists, if not all, will not have a physical counterpart.

Rob: On your Twitter page you posted that you are working on a new CD. What can we expect and when?

Steve Vai: It should come out either the end for this year or the beginning of next year. It’s another – type record; very dynamic in its sonic and emotional range. I started out with the idea of recording a simple record that was more trio based, but as usual I got caught up in my own inner ear desires. The record is gaining depth.

Rob: I found the liner notes and back stories for each single available on VaiTunes as enjoyable as the songs themselves. Any plans to write a book about your insights and experiences with songwriting and playing?

Steve Vai: Sure, I have all sorts of aspirations for stuff like that but desires change as time rolls on and you need to prioritize. I would very much like to create a comprehensive guitar curricula called “Alien Guitar Secrets”.

Rob: Many guitarists are out there talking a lot about guitar tone and “chasing tone”. How important is tone to you, compared to other aspect of sound and playing? Are people getting lost in the marketing of products that all promise the best tone and chasing it for no other reason than big name guitarists saying they need it?

Steve Vai: People will promise the best of whatever it is they are selling but buyer beware. Your tone can only sound like what you are imagining in your minds ear. The tone of a note is in your head and fingers.

Rob: At what point in your career did you realize that your style was truly unique?

Steve Vai: When “The Attitude Song” first came out in guitar player magazine and everyone just flipped out. Before that I figure if I could do something, then most people can too.

Rob: Did you ever think that you would be the guitarist that you are today?

Steve Vai: Yes, but even more excited about the guitarist I will be tomorrow.

Rob: What about Ibanez that makes you continue to use them?

Steve Vai: They continue to make the guitar of my dreams.

Rob: Do you have a favorite guitar?

Rob: You have quite an extensive collection of guitars, is there ever a guitar you gave away and wish you could somehow get back?

Steve Vai: It seems to me you always get back something when you give something, and what you get back is in direct proportion to your intention when you gave.

Rob: Your record label Favored Nations has many great acts. How do you select the artists?

Steve Vai: The kind of artists I look for at Favored Nations are people who are independent, passionate, have unstoppable drive and above all else, fearless confidence in their work. Nothing else works or sounds as good.

Rob: I’m sure you are invited to tour with many artists… What is it about the Experience Hendrix Tour that makes you continue to participate?

Steve Vai: I have been invited for the past 10 years but only toured this year with them. It’s a great group of people. A lot of love and respect on that tour! And of course it’s some of the best guitar music in the world.

Rob: Regarding the Experience Hendrix Tour, you recently did a small number of shows on the west coast; will you come out East with them?

Steve Vai: Keep your eye on their web page but for me, I’m hunkering down on a new record and a long tour so no more side projects.

Rob: You performed with some great bands like Zappa, Whitesnake, DLR, and PIL. Any plans to join a band? Is there a band that you would like to or even consider joining if there was an opportunity?

Steve Vai: No, I am only concerned with my solo music now. Everything else feels as though I’m wasting my time. My goal is to create unclassifiable body of undiluted work.

Rob: In your career has there even been a band that you auditioned for but they didn’t hire you?

Steve Vai: I auditioned for the band “UK” when I was 19 years old. I didn’t get the gig but I did pass the audition for Frank Zappa’s band around the same time. I was more suited for that. 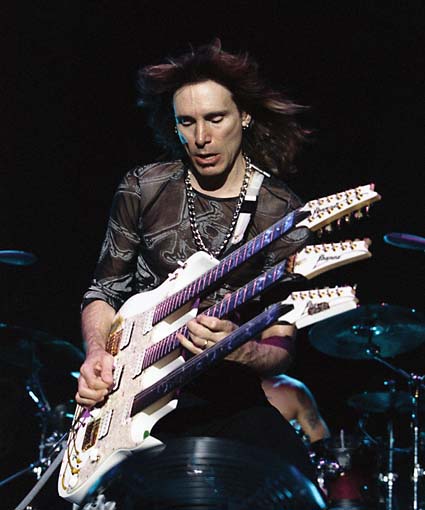