Wymer Publishing will release the new STATUS QUO book “Over And Done” on April 11. The hardback book comes in a block foil denim blue presentation box with a set of five prints.

“Over And Done” is a lavish, coffee-table-style book that is a celebration of the classic QUO lineup of Francis Rossi, Rick Parfitt, Alan Lancaster and John Coghlan and is built around a huge selection of mainly, unpublished on and offstage photos from the seventies, alongside images from the 2013-2014 reunion.

Words come from long-standing, devoted QUO fan Alan Stutz who has seen the band in excess of one hundred times since 1976, including every London show from thereon that the classic lineup played in the seventies plus the very last show performed in Dublin in 2014.

This hardback book is presented in a denim blue, block foil, custom made, presentation box and includes a set of prints suitable for framing.

Limited to just 500 copies worldwide, this unique book encapsulates the excitement of the ultimate QUO lineup in all its glory and is topped off with a foreword by John Coghlan.

With the sad passing of Rick Parfitt in 2016, the 2013-2014 reunion proved to be the last chance to witness the legendary Frantic Four on stage.

“Over And Done” will help bring back some of the excitement and memories that every QUO fan who witnessed the classic band will have. This is a beautiful memento of moments in QUO history that sadly are now truly over and done.

Customers who pre-order by March 25 will have their name printed in the book. 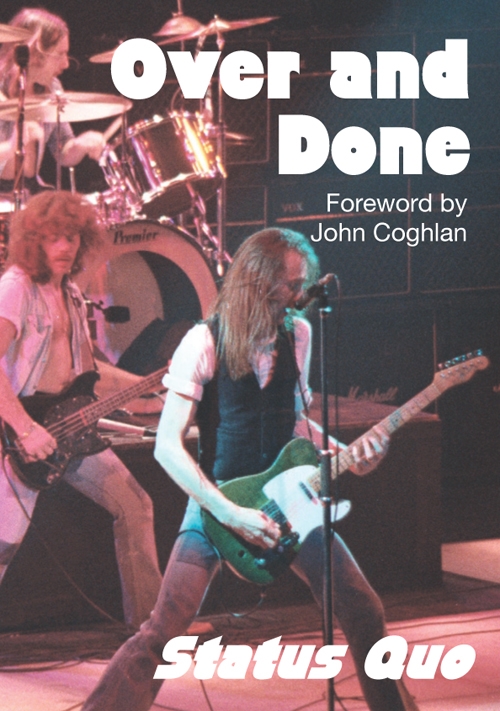