STATIC-X will release a new album titled “Project Regeneration”, featuring the last recordings of the band’s late frontman Wayne Static, in 2019. The rest of the group’s original lineup — bassist Tony Campos, drummer Ken Jay and guitarist Koichi Fukuda — will also be featured on the album and in the music videos, including the announcement clip, which can be seen below.

Director Matt Zane (JOHN 5, WEDNESDAY 13, ZAKK WYLDE, DOPE) was contacted to assist in creating the new videos — an obvious choice considering he directed the final three videos for Wayne Static before his passing.

Campos states: “Matt did an amazing job with the video. He put in a lot of love and effort into it, and the end results show it. A great pleasure working with him, and look forward to future collaborations.”

Adds Zane: “I received the call to co-direct as well as be the director of photography and couldn’t believe it was happening until we were on set. It was very surreal. I hadn’t seen the rest of the band in years. Being able to work with them and share old stories from back in the day was so cool. My band SOCIETY 1 and STATIC-X used to cross paths touring as far back as the late ’90s. Even before that we were all on the local scene in Hollywood.

Zane even unearthed outtakes of Wayne for the video. “I really wanted to actually get Wayne in there visually so it was the four of them back together again not only musically but visually,” he said. “I had to find outtakes from previous videos Wayne and I did then go through a process called rotoscoping in order to place him in the new videos. Extremely detailed and long process but completely worth the effort.”

As you can witness from the teaser that was released, the result is the feeling that the original band is together one more time.

“It was amazing getting to work with the band and it felt as if I was able to get to work with Wayne one more time,” said Zane. “To be able to come in and pay my respects and help Wayne finish his final offerings for all the fans was an incredible experience.”

Zane and his band SOCIETY 1 are managed by Music Gallery International and are currently finishing a new album titled “Black Level Six” as well as video projects for John 5 (ROB ZOMBIE) and many more. 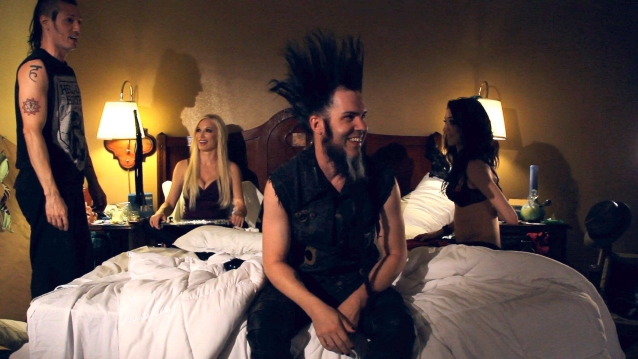