The official lyric video for the song “Wild Butterflies” from STARBREAKER can be seen below. The track is taken from the band’s third album, “Dysphoria”, which is being released today (Friday, January 25) via Frontiers Music Srl.

Tony Harnell, the critically acclaimed singer/songwriter and former vocalist of hard rock band TNT, and Magnus Karlsson, current PRIMAL FEAR guitarist extraordinaire, have rejoined forces for the release of “Dysphoria”. The disc showcases everything the project has become known for: metal sensibilities, melodic songs with killer hooks, thought provoking lyrics, inventive, intricate guitar playing, occasional prog twists, and a crisp production. Along with explosive performances from Harnell and Karlsson, these are the trademarks which the listener will find in “Dysphoria” and that make this album so very unique and special.

Of calling the album “Dysphoria”, Tony states that the “title is simply a reflection of a state of mind and I thought it fit the lyrical theme of the songs. If I tried to summarize the lyrical theme of the album I would say it’s beautifully sad, but infinitely hopeful. Life is always my biggest inspiration. It was an easy album to write lyrically for that reason. There was no writer’s block and the themes are probably pretty obvious. I don’t like to paint too clear a picture for the listener, it’s best to let the words speak to them without guidance”. On the first song released from the album, he says: “‘Pure Evil’ is the heaviest the album gets and not indicative of the album as a whole, although there are some metal overtones throughout.”

Of the music direction on the album, Magnus states: “Tony‘s voice gives me inspiration to write my riffs and melodies. I imagine his voice, so in my head, I visualize the finished songs with great production. The two first albums didn’t take much more than a year from finish to start. This release was made over a much longer period because of our other bands and productions. It’s the first time I worked on an album with breaks in the production. In the end, it came out much better. I’m really happy with the sound on a STARBREAKER album. Thanks to Simone Mularoni (DGM) who did a great job with the mix. And Jonni Lightfoot and Anders Köllerfors who really made the songs shine! Tony‘s voice sounds better than ever, just amazing! You can have the best songs, best production or fastest guitar solos, but if the vocals aren’t top notch, you have nothing!”

STARBREAKER started as Harnell‘s side project while he was still fronting TNT. He was initially working on a solo record, with Karlsson, former TNT drummer John Macaluso, and bassist Fabrizio Grossi, but they morphed into STARBREAKER, releasing their first self-titled studio album in 2005. In late 2007, Harnell flew to Sweden to write the bulk of the songs for the new album with Karlsson, and started recording the new songs at the end of that year. The group’s second album, “Love’s Dying Wish”, was released in August 2008. It featured new bassist Jonni Lightfoot, who replaced Grossi, and was produced by Harnell and Karlsson, with Tommy Hansen (TNT, PRETTY MAIDS, HELLOWEEN) serving as the mixer.

The songwriting for the new STARBREAKER album started back before Harnell rejoined TNT in 2016, but it was after his ultimate split from that band, in October 2017, that he and Karlsson put the pedal to the metal and quickly completed “Dysphoria”. 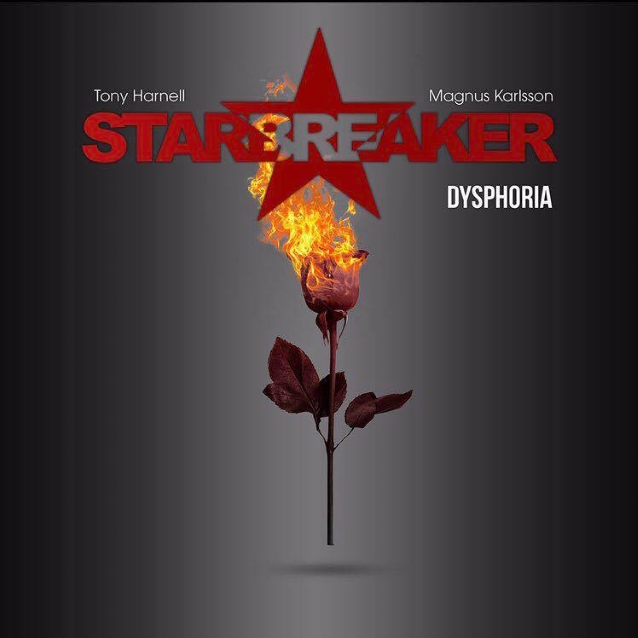