When the members of SLAYER were approached by Nuclear Blast America‘s general manager Gerardo Martinez to make a music video for “Repentless”, the title track of the band’s 2015 label debut, they thought it was going to be a cool, one-off music video. Little did they know.

Martinez put the band together with up-and-coming director BJ McDonnell who turned in a storyline that the band really liked. McDonnell made his living as a motion picture and televison camera/ steadicam operator, having worked on features such as “Avengers: Age of Ultron”, “The Interview” and “Jack Reacher”, and had one directing project under his belt, 2013’s “Hatchet III”.

“Meeting him, he was excited,” remembers SLAYER‘s Tom Araya. “He really liked the fact he was working with the band, he was a fan, and his excitement rubbed off because it made me excited. I thought, ‘well this is gonna be fucking great!'”

Said SLAYER‘s Kerry King: “When I saw ‘Repentless’, I said ‘that’s the video we should have done 20 years ago. It’s SLAYER. That video is SLAYER.'”

Rolling Stone premiered the “Repentless” video on September 11, 2015 writing “Full of gore and blood, the clip stays true to the legacy of the band.”

To date, the “Repentless” video has accumulated more than ten million YouTube views.

In the late fall of 2015, Martinez discussed with McDonnell the idea of doing a prequel and sequel for “Repentless”. McDonnell loved the idea and wrote the treatments. Filming for both videos took place February 1-2, 2016. “You Against You” was shot at The Aviation Warehouse, a graveyard of jets, airplanes and helicopters in Calfornia’s Mojave Desert and premiered on March 16, 2016. Fuse.tv wrote that the video was “a gruesome, unholy, blood-ridden slaughterfest and also one of the top five fight sequences you’ll see this year.” So far, the video has racked up more than five million YouTube views.

The snowy mountains of Wrightwood, California served as the location for the final video in the trilogy, “Pride In Prejudice”, that made its debut on September 6, 2016. Loudwire called the video “an over-the-top gorefest,” while it prompted Digital Music News to ask the question, “Has SLAYER gone too far in their new music video?” The same day the video made its premier, it scored nearly one-million views on all social formats.

Said McDonnell: “Having the opportunity to write and direct three music videos for a band I’ve always loved was a bucket list dream come true. All of the guys in SLAYER made me feel so comfortable and at home. I put them in the worst elements possible and they were always enthusiastic and ready to bring the ‘A’ game. Heat, snow, wind, etc., the band owned it, bringing my vision to life. The band and crew all worked hard to bring this trilogy to life and I’m very proud of what we created.”

Pictured below: SLAYER with director BJ McDonnell on the set of the “Pride in Prejudice” video in the mountains of Wrightwood, California on February 2, 2016 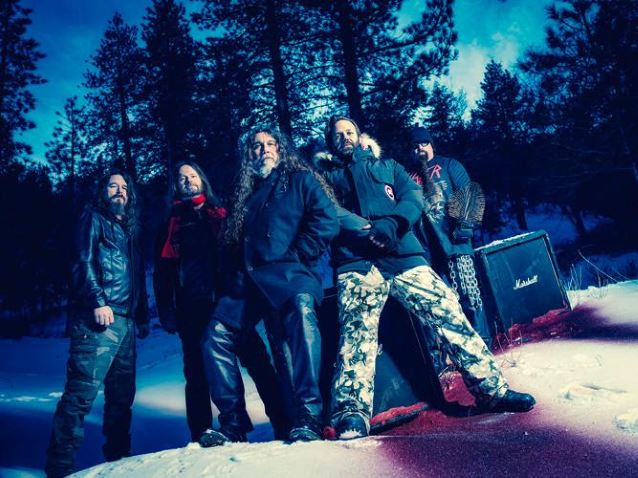