SLAYER‘s concert last night (Saturday, August 5) at the Forum in Inglewood, California was reportedly filmed for a forthcoming DVD.

Adam “Nergal” Darski of Polish extreme metallers BEHEMOTH, who supported SLAYER at the Forum show (along with LAMB OF GOD), wrote on his Facebook page a few hours before the gig: “Playing in a legendary The Forum tonight. SLAYER is shooting DVD. Proud to be part of this historical day.”

In a recent interview with Westword, SLAYER guitarist Kerry King said that he had no desire to change up the band’s sound or explore new musical territory.

“If SLAYER ended tomorrow, I’d be in a band that sounds just like SLAYER, because that’s all I know how to make up,” King said.

“I like AC/DC for being AC/DC. I like JUDAS PRIEST for being JUDAS PRIEST. I think people like SLAYER because we sound like SLAYER, and they don’t want us to do anything else,” he added. “As far as maturing, going different directions, I have no desire.”

King also defended SLAYER‘s decision to carry on after the death of the band’s co-founding guitarist, Jeff Hanneman, who wrote many of SLAYER‘s classic songs, and the departure of the group’s original drummer, Dave Lombardo.

While writing material for SLAYER‘s 2015 “Repentless” album, “I was really just going for good stuff more than ever,” King said. “Ninety-five percent of it was put on my shoulders for the first time. I wanted to make sure that I had a record that wasn’t only awesome in my eyes, but pretty much bulletproof. More so than ever. You know how the Internet is. So many people say, ‘Jeff‘s not here. Dave‘s not here. It isn’t the same.’ I said, ‘Yes, motherfucker. It is the same.’ I mean, there are some differences. I don’t want to belittle that. But the SLAYER machine keeps on going.”

“Repentless” was released on September 11, 2015 via Nuclear Blast. The follow-up to 2009’s critically acclaimed, Grammy-nominated “World Painted Blood” was produced by Terry Date, who has previously worked with PANTERA, DEFTONES and SOUNDGARDEN. The artwork was created by Brazilian artist Marcelo Vasco in collaboration with Tom Araya and Kerry King. 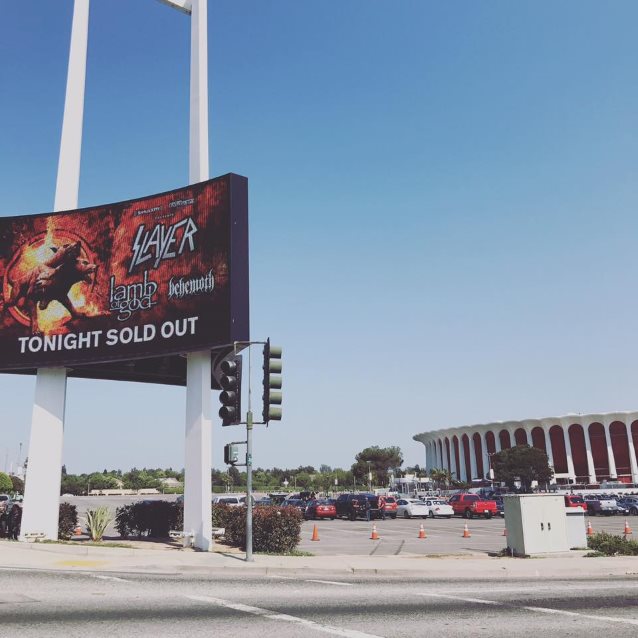