Tickets for SLAYER‘s November 30 show at the “Fabulous” Forum went on sale last Friday and by the end of the day, had sold out. Due to the quick sell out, today SLAYER announces a second Forum show now confirmed for Friday, November 29 for fans who may have missed out on getting tickets. This show is the last addition to SLAYER‘s final world tour.

A special BLABBERMOUTH.NET presale will begin on Wednesday, July 17 at 10:00 a.m. local time and end on Thursday, July 18 at 10:00 p.m. local time. When prompted, type in the presale code “REPENT” to access tickets before the general public.

SLAYER will set off on “The Final Campaign”, the seventh and final leg of its farewell world tour in November. This last hurrah will start at the ExploreAsheville Arena in Asheville, North Carolina, and see the band taking its goodbye bow at the Los Angeles Forum on November 30. Accompanying SLAYER for this last ride are PRIMUS, MINISTRY and PHILIP H. ANSELMO & THE ILLEGALS performing a vulgar display of PANTERA, who will support on all dates.

SLAYER‘s final world tour began on May 10, 2018 with the band’s intention to play as many places as possible, to make it easy for the fans to see one last SLAYER show and say goodbye. By the time the 18-month trek wraps on November 30, the band will have completed seven tour legs plus a series of one-off major summer festivals, performing more than 140 shows in 30-countries and 40 U.S. states.

SLAYER‘s final world tour has been a wild ride. Three bus drivers, four truck drivers, and a crew of 32 have traveled all over the world to set the stage for this farewell. At most shows, SLAYER‘s pyro expert set off 160 pounds of propane and 10 liters of 99% isopropyl alcohol, prompting the Phoenix New Times reviewer to comment on the “eyebrow-singeing pyrotechnics that could be felt even 10 rows behind the pit.” In Toronto, one diehard fan was ejected from the concert before SLAYER took the stage, so jumped into Lake Ontario (that surrounds the Budweiser Arena) and swam back to the venue. The Tampa Bay Times‘ Jay Cridlin wrote, “Beginning with the throttling opener ‘Repentless’, SLAYER tore through their set like a flaming cigarette boat across the river Styx, charring up a vicious circle pit by the stage,” and Detroit’s Gary Graff noted in his Oakland Press review the “10,000 headbangers who skipped the ‘Game Of Thrones’ finale to pay homage to the pioneering quartet.” “The sheer physicality of their show was something to behold and was yet another indication that while the band may be calling it a career, they are going out on top, playing at their absolute best,” wrote Andy Lindquist for the SF Sonic, and Guy D’Astolfo with the Youngtown Vindicator ended his review with this: “After the final note, Tom Araya stood alone, scanning the crowd…forging a mental imprint of the moment. After a minute or two, he went to the microphone and said, ‘I’m going to miss you guys.’ Then he exited and the lights went up.”

Araya talked about his possible retirement in a 2016 interview with Loudwire. He said: “At 35 years, it’s time to collect my pension. [Laughs] This is a career move.” He continued: “I’m grateful that we’ve been around for 35 years; that’s a really long time. So, yeah, to me, it is. Because when we started off, everything was great, because you’re young and invincible. And then there came a time where I became a family man, and I had a tough time flying back and forth. And now, at this stage, at the level we’re at now, I can do that; I can fly home when I want to, on days off, and spend some time with my family, which is something I wasn’t able to do when [my kids] were growing up. Now they’re both older and mature. So now I take advantage of that.” Araya added: “Yeah, it just gets harder and harder to come back out on the road. 35 years is a long time.”

Tom also revealed another reason for his diminished enjoyment of the touring life. He said: “There’s things that have gone on in my life that have made me change how I play as a bass player. I had neck surgery, so I can’t headbang anymore. And that was a big part of what I enjoyed doing what I do — singing and headbanging. I liked knowing that I was one of the fucking badass headbangers. That played a big part. Now I just groove with the music, which is cool, because I’m grooving with the music and the feel of the songs, so that’s changed a little for me.”

SLAYER has been touring in support of its latest album, “Repentless”, which was released in September 2015 via Nuclear Blast. That effort marked the band’s first release since the death of SLAYER‘s co-founding guitarist Jeff Hanneman.

Hanneman contracted necrotizing fasciitis, also known as flesh-eating disease, in January 2011 from a spider bite in his backyard. The infection ravaged the flesh and tissues of Hanneman‘s arm, leading to numerous surgeries, skin grafts and intense periods of rehab that forced him into semi-retirement and left him near death at several points.

Original SLAYER drummer Dave Lombardo was effectively fired from the band after sitting out the group’s Australian tour in February/March 2013 due to a contract dispute with the other members of SLAYER. He has since been replaced by Paul Bostaph, who was previously SLAYER‘s drummer from 1992 until 2001 and recorded four albums with the band. 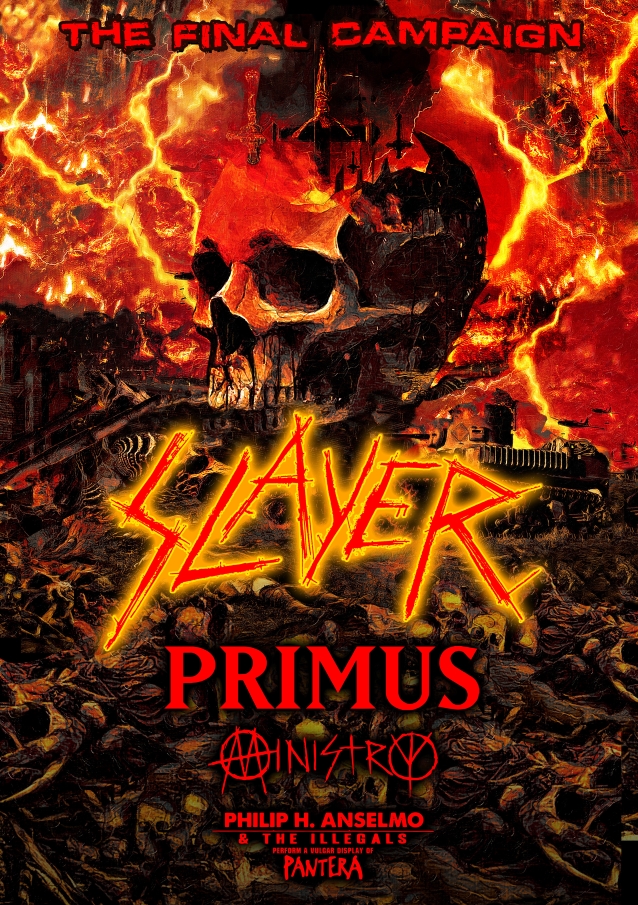