“This band coming together was a natural fit,” says Seals, who has taken on both vocal and guitar duties in THUNDERBOLT HYDRAULIC. “Bruce and I have been kicking around some of these songs for years. When our schedules freed up enough to actually put this band together, we knew right away that Rob was the drummer we wanted.” All three of THUNDERBOLT HYDRAULIC‘s members have been thoroughly steeped in the Atlanta rock scene, with Butkovich and Hammersmith having previously collaborated in THE HALLS OF JUPITER and THE FUTURA BOLD.

Seals, who formerly played guitar for ETHER SEEDS alongside vocalist Dustin Lowery (the younger brother of SEVENDUST‘s Clint Lowery and SAINT ASONIA‘s Corey Lowery), started THUNDERBOLT HYDRAULIC in 2015. ETHER SEEDS briefly made a splash on the modern rock and active rock charts in 2003 with its first single, “Save Your Own Life”. The band’s unreleased first record was shelved by its label after the company encountered a number of financial difficulties attributed to slumping sales across the music industry. ETHER SEEDS disbanded shortly thereafter. After playing in a series of other projects following the breakup of ETHER SEEDS, Seals began writing music in 2015 that would ultimately form the cornerstone of THUNDERBOLT HYDRAULIC. “I had all of these songs in in my head,” says Seals, “I just had to find the right guys to help get them out.”

Bruce Butkovich, who currently plays guitar in JAMES HALL & THE STEADY WICKED, changed roles to playing bass for THUNDERBOLT HYDRAULIC. “I’m a bass player at heart, though I play a number of other instruments,” Butkovich relates. “Getting back to playing aggressive bass is reinvigorating.” James Hall has remained an iconic Atlanta-based artist by way of multiple bands, including MARY MY HOPE and THE PLEASURE CLUB. Butkovich and James Hall teamed up in 2005 to collaborate on multiple projects, including the THE FUTURA BOLD, and most recently JAMES HALL & THE STEADY WICKED. In addition to playing bass, Butkovich brings a wealth of studio expertise to the band — recording and mixing THUNDERBOLT HYDRAULIC, as well as producing numerous other acts.

Rob Hammersmith, who continues to play drums with SKID ROW, joined THUNDERBOLT HYDRAULIC after hearing a demo that Seals emailed him. “I almost missed the boat,” Hammersmith recounts. “Steve e-mailed me this demo and asked me if I would like to play in the band. Somehow it got buried in my inbox and I didn’t actually run across it until a month later. Fortunately, they still needed a drummer and it all worked out.”

Hammersmith joined SKID ROW in 2010. After famously parting ways with Sebastian Bach in 1996, SKID ROW has most recently recruited former DRAGONFORCE vocalist ZP Theart to front the band. With a steady diet of live dates and a new record that will see the band reuniting with producer Michael Wagener (ALICE COOPER, DOKKEN, GREAT WHITE), Hammersmith retains a strong commitment to SKID ROW while fitting in THUNDERBOLT HYDRAULIC as scheduling permits.

“The THUNDERBOLT HYDRAULIC record is probably different than what many people will be expecting,” relates Hammersmith. “It’s definitely still in the heavy rock vein, but there’s a lot of depth to this material. It has been a challenge in the best possible sense.”

Recorded and mixed by bassist Bruce Butkovich at East Atlanta Recording, “The Best Of Intentions” will be available on Spotify, iTunes, Apple Music and most major digital music platforms beginning September 14.

While the group’s members still maintain strong commitments to other projects, they are nonetheless seizing upon every opportunity to rehearse for upcoming live dates in support of their debut release.

“The Best Of Intentions” track listing: 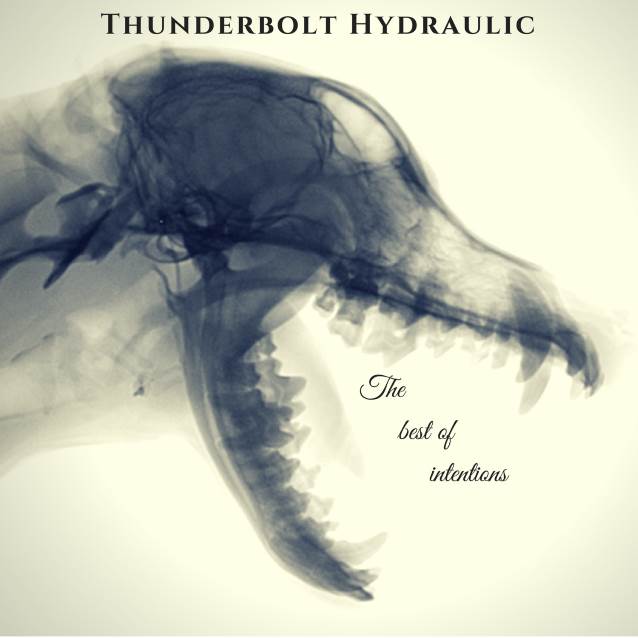