“Iron” Mike Savoia of Savoia Photography Live has uploaded video footage of SEPULTURA‘s May 14 concert at Studio Seven in Seattle, Washington. Check it out below.

SEPULTURA is currently headlining a North American tour with support from German thrashers DESTRUCTION and American melodic tech-deathsters ARSIS. The mayhem kicked off in Phoenix, Arizona on May 10 and will end on June 14 in Grand Junction, Colorado.

SEPULTURA was joined by legendary guitarist Steve Vai on stage during the band’s May 9 performance at the Rock In Rio USA festival in Las Vegas, Nevada.

SEPULTURA recently recorded a new song called “DarkSide” for the Brazilian publisher DarkSide Books. The track was “inspired by the darker side of literature.”

This is not the first time a member of SEPULTURA has collaborated with DarkSide Books. Back in 2013, SEPULTURA guitarist Andreas Kisser wrote the foreword to the BLACK SABBATH biography “Destruição Desencadeada”.

As previously reported, SEPULTURA will celebrate its 30th anniversary by releasing a special tribute to their fans. The band has asked fans to contribute to the artwork for a new track, and the result is “Sepultura Under My Skin”, which will be released on June 5 on colored vinyl. The artwork for this release was created using pictures of tattoos of SEPULTURA fans all over the world.

SEPULTURA‘s latest album, “The Mediator Between Head And Hands Must Be The Heart”, sold around 1,800 copies in the United States in its first week of release. The CD came out on October 29, 2013 via Nuclear Blast Records. 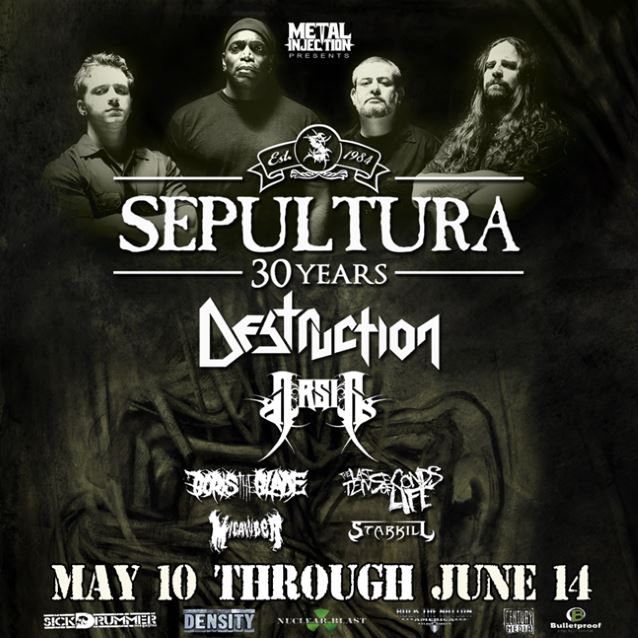