Tim: “There’s not anything else out there. It was talked about being done before, in my opinion. I vaguely heard about it, I didn’t even know too much about it. Nothing was ever done. I mean, listen, the name wasn’t even taken. We own the name. Sean got the name. There’s no web sites, there’s no records, there’s no nothing.”

Sean: “It was an urban legend and it would have been great if they would have done it. I was just sitting there thinking, ‘If they’re not going to do it, let’s do it and who are the two best guys that I can think of in metal to put a powerhouse record like this together?’ Harry and Tim, that was five years ago and we’ve been working on this in secrecy this whole time.”

Sean: “It’s like resurrecting the idea that was and actually doing it. That was the thought behind it.”

On whether they have any fears of retribution from Dickinson:

Tim: “Sean‘s probably more than happy to sell them the rights to the name because he owns it.”

Sean: “If they want to put out their version of THE THREE TREMORS, you have my permission to do it.”

Tim: I’m pretty sure Sean would kick me out to get Rob in the band. It’s been done before.”

Sean: “It seemed like a cool thing that would never happen and we decided to do it. Here it is and it’s great so far. We had our first practice, we got together with the band and the three of us and doing these 12 original songs and it’s killer. Today was insane.”

On the recording process for their self-titled debut album:

Harry: “It was really great. They gave me all the songs and they gave me license to put my style of music on it. They gave me a chance to be creative with all of these songs. I recorded it in my home studio and I think one of us did [record in their studios]. It was just a pleasure for me and an honor to put my likeness on metal like this, power metal especially that I grew up with. It’s just an honor for me to be a part of this whole THREE TREMORS thing. I jumped on it and I loved recording it. They gave me the license for creative ability to put in the songs and also, they gave me the free time to take as long as I needed to in order to get it happen.”

On how long it took for THE THREE TREMORS to come together:

Sean: “First, I asked Tim, like, ‘Hey, man, this is the idea. Are you down?’ I was so stoked when he said he would do it. These were the picks, man, these were the guys I wanted and he said yes first, then I was hanging with Harry at the Keep It True [festival] in Germany and we were at this after-party and I’m like, ‘Dude, we’re doing this THREE TREMORS. Ripper‘s in. He’s like ‘Yeah, let’s do it.’ Then, the CAGE guys and me spent time putting the songs together and then we were finally ready to send the songs to these guys and go, ‘Okay, now we’re ready to start recording.’ I wanted the songs, you can have great singers and whatever, but if the songs aren’t any good, it doesn’t mean shit. The focus was on getting killer metal, heavy metal songs. That’s kind of why, at first, I was thinking I would get all kinds of different people from bands and friends I had, then I decided to keep it in the CAGE camp because we’re really good at crafting songs together.”

Sean: “Once we had the songs, we sent them to the guys going ‘Man, I hope these guys like these songs as much as we do.’ They did. Then we started getting all the tracks together. The real challenge was putting, like I got their tracks and I was like, ‘I didn’t want to put me on anything because these guys sounded so good.’ I didn’t even want to put me on it because these guys sounded so good. We were able to find the right magic, but putting all the different vocals without having it sound like a bunch of mish-mash crap. We can’t wait for people to hear the results.”

On the sound of THE THREE TREMORS:

Tim: “The big thing about this is that it’s got a lot of light and shade on it, but it’s mainly straightforward. The vocals are in-your-face. A lot of highs, stuff that not everybody does. It’s like we hit this market that I hear fans talk about all over the world that I go, that you find these fans all over the world that love to hear this music, the power metal, the faster metal. Like you said, HELLOWEEN is playing here and they’re playing in front of thousands and thousands of people in San Diego and L.A. People, they want this stuff and they don’t get to get it and we have the opportunity to do this music that is right at the old-school metal fans. This is stuff that is really going to get them. I even attacked it a little bit different for myself. I did more falsetto, more of a different voice where I would usually sing in my natural voice and power voice and I used a more, a good example would be the METAL CHURCH kind of voice I would use, or AC/DC voice because I was able to do it with this. Because there’s three singers, so I know someone else is going to sing it in the other voice I would have used. But, there’s going to be a lot of people out there that’s going to love this, a lot of these diehard fans. It’s definitely some true metal.”

Tim: “It’s got everything. It’s got your songs that have the rhythms and everything. The solos are amazing on the record, the drumming. Everything about this record, everything that is coming at you is great.”

Harry: “Very moody, lots of passion in each of every song.”

Sean: “I think there’s a lot of good hooks on it, too. We try to make hooks on every record. I got into heavy metal with IRON MAIDEN, JUDAS PRIEST, METAL CHURCH, W.A.S.P., TESTAMENT stuff, even stuff like DOKKEN and RATT because they had such good hooks and choruses. That’s kind of how we write in that style of the classics, then be able to throw the voices on, just opened up, the sky is the limit. Live, we’ll be able to do it.”

THE THREE TREMORS‘ self-titled debut LP is due later this year. Check out audio samples on the project’s PledgeMusic page.

THE THREE TREMORS‘ self-titled debut album will feature 12 new songs that depict monumental stories of time honored heavy metal themes as written by Peck, focusing on original concepts to highlight three of the most revered and relentless voices in heavy metal. 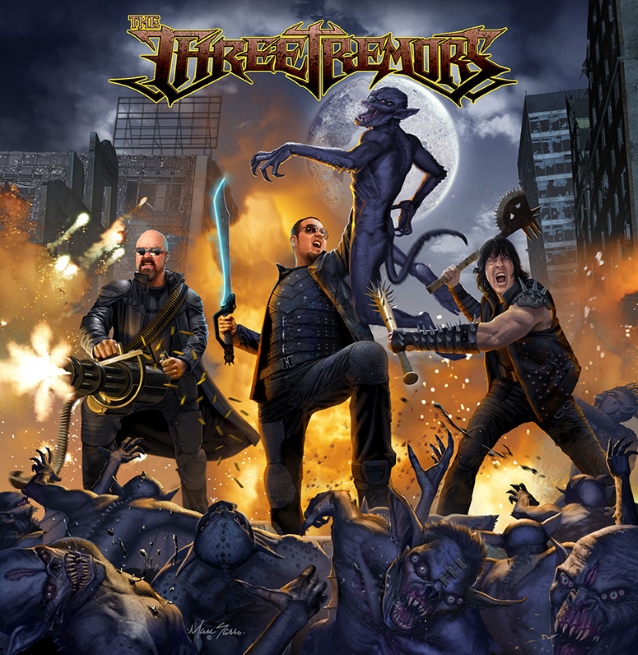