Vocalist Klaus Meine and guitarist Rudolf Schenker of German hard rock veterans SCORPIONS took part in a press conference on February 9 in Paris, France. You can now watch video footage of the question-and-answer session below.

Speaking about SCORPIONS‘ decision to scrap their retirement plans and record a new studio album, “Return To Forever”, Meine said: “When we decided [to do a] farewell tour back in 2010, we thought we had a great album with ‘Sting In The Nail’, and especially whenever we were thinking we would go out on the road again for two or three years around the world, and coming back from that tour, we would definitely be in our sixties, saying, ‘How can we keep going at this pace, this tempo, with this energy and power and still deliver a really great show night after night after night? [How can we] do a hundred shows, year after year, in twenty, thirty countries around the world? So that was a huge question mark up in the air for the two of us. And then we realized during the farewell tour, it’s easier to say than to do, and it was so emotional in many ways, and to see that we had a whole new audience of SCORPIONS fans out there, and [we were playing in front] of three generations.”

He continued: “So coming towards the end of that tour, the end of 2012 in Munich, we realized we don’t split up. We might take the foot off the gas a bit and take it easy, play a few concerts, maybe [take part in] a nice project, not knowing that only a few weeks later ‘MTV Unplugged’ would knock at the door and say, ‘SCORPIONS, how about an ‘MTV Unplugged’?’ Normally, we should have said, ‘We’re sorry. You’re too late. We just split up.’ But nobody would do that, right?! So we kept going, [and] we recorded ‘MTV Unplugged’. We prepared for that one and wrote some new songs, because we thought it would be nice to make the show more attractive to also use some new material. And in a way we opened the creative gates. At the same time, we started already going back to the ’80s, we’d been to the studio with our Swedish producers — I think we started in 2011 or 2012 — recording songs from the ’80s, calling the project ‘Outtakes’ as a working title. And we knew we had some great material sitting there. And at the time, we weren’t thinking about making a new record. Our mood was to [release something] as a bonus album at some point. We did ‘Comeblack’, yes, with cover versions, but we knew we had a great one sitting there, with songs never released, never finished, with some working lyrics, and we had to come up with a new chorus or something. So this was the situation. And we had started already some years back.”

Meine added: “After ‘MTV Unplugged’ and after some very successful shows we did in Germany last summer, we went back into the studio, and in the meantime, there were new songs. Everybody had written new songs, and so at the end of last year, it was a good balance between ’80s stuff and also brand new songs. So this album, ‘Return To Forever’, was building up over the last couple of years — not so much in the sense, ‘Now we make a new record.’ So it was building up. In between, we played some shows, we went back with the Swedish guys and did some recordings, and we were in a comfortable situation at the end of last year, having twenty songs and thinking about, ‘So, guys, we do a double record now or what?’ [Laughs] So it was a lucky situation. At the same time, when this 50th-anniversary tour project came up, we thought it would be nice to focus it all on 2015, bring out a new album and celebrate this very special anniversary, not only with a new record but with a movie. We just did the world premiere in Berlin last week [for] the movie called ‘Forever And A Day’, and we know we will have a movie premiere here in Paris as well very soon. So it’s a long story, but here we are in 2015, all psyched up and excited. And we feel it’s a privilege, after all these years and after this experience called ‘farewell tour,’ it’s a privilege we’re still around and it’s privilege we still can play this global stage out there. And to have so many fans, and also so many young fans from the new rock audience, that come to see us wherever we go, it’s just fanstastic and very inspiring and motivating.”

The brand-new SCORPIONS studio album “Return To Forever” will be released on February 20 on CD, Deluxe CD, vinyl, Limited Collector’s Box, and several more digital and physical formats. The first single, “We Built This House”, can be downloaded as an Instant Grat on iTunes and Amazon MP3 as of now.

“Return To Forever” was recorded with Mikael Nord Andersson and Martin Hansen, who had already produced “Sting In The Tail”, and re-arranged the material for “MTV Unplugged” with guitarist Matthias Jabs. 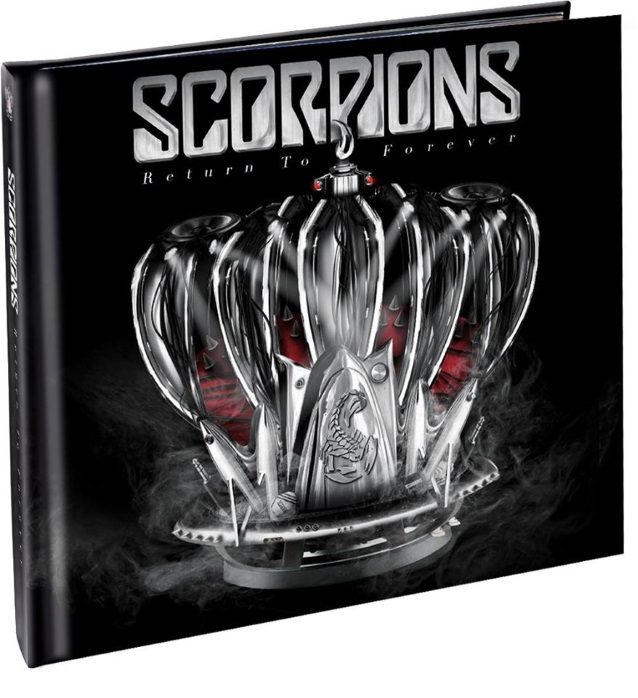