Iconic rockers SCORPIONS will hit the road in May for twelve North American headlining dates with Mikkey Dee, formerly of MOTÖRHEAD, sitting in on drums. Dee will be filling in for James Kottak, who is currently on break while he seeks medical attention.

Swedish-born Mikkey Dee joined MOTÖRHEAD in 1992 and is well-respected among the rock and metal community. SCORPIONS singer Klaus Meine states: “We would like to continue our ‘Return To Forever’ tour with James, but we have to realize that his health is priority. We wish James a speedy recovery and he will be back to rock you later in the fall! We look forward to seeing all our fans this month.”

SCORPIONS kick off the 2016 U.S. leg with twelve dates in May beginning at Carolina Rebellion in Charlotte, North Carolina on May 6. The run includes a Las Vegas residency.

For some of SCORPIONS‘ 2014 concerts, Swedish drummer Johan Franzon filled in for Kottak.

Because of his arrest, Kottak did not perform with his bandmates at the April 5, 2014 show at the Formula One Gulf Air Bahrain Grand Prix and was replaced at the gig by Mark Cross (TAINTED NATION, FIREWIND, OUTLOUD, HELLOWEEN, METALLIUM).

SCORPIONS vocalist Klaus Meine told the SCORPIONS French fan club Crazyscorps in October about Kottak: “With James, you know, when he went through this unfortunate incident in Dubai, we said, ‘At this point, it’s good if you take a break. Not so much for us, but for yourself. And not so much being the drummer of the SCORPIONS, but for yourself being a family man. And you should go into rehab and don’t think about anything else but just try to clean out yourself and come back the same James we know for so many years that’s been not only our drummer, but also our friend, and a great guy.’ So, giving him that time, we played this whole stretch of shows with a great Swedish drummer, Johan Franzon. And now, of course, we want James back, and we said to him, ‘The door is open for you to come back. But first, it’s up to you, and you have to take care about yourself, take it serious, go through a serious rehab, and then the door will be open for you.'”

Dee was originally scheduled to play drums for THIN LIZZY on the latter band’s forthcoming anniversary shows planned for 2016 and 2017 but recently bowed out of the dates. He has since been replaced in that group’s touring lineup by JUDAS PRIEST‘s Scott Travis. 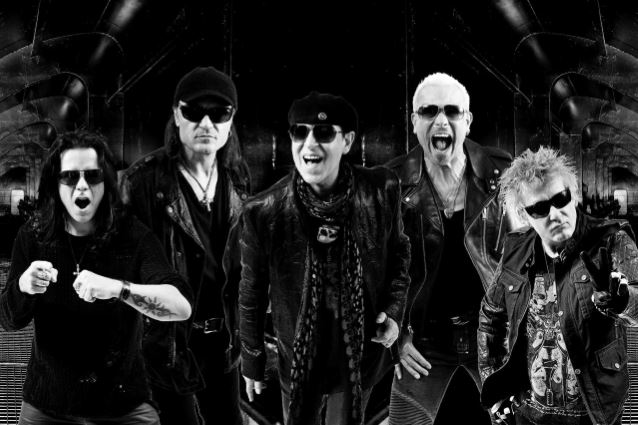