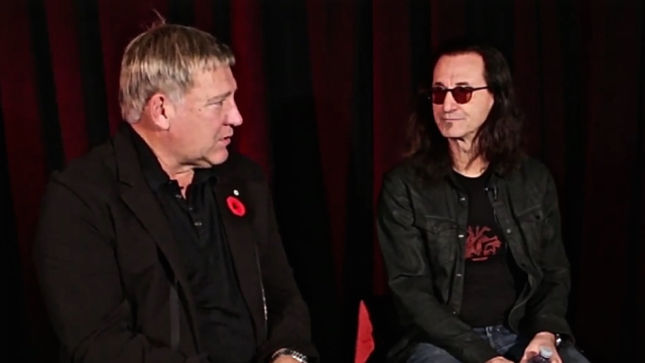 Neil told Drumhead Magazine: “Lately Olivia (Louise, Neil’s daughter) has been introducing me to new friends at school as ‘My dad – he’s a retired drummer.’ True to say, funny to hear. And it does not pain me to realize that, like all athletes, there comes a time to… take yourself out of the game. I would rather set it aside then face the predicament described in our song “Losing It” (‘Sadder still to watch it die, than never to have known it’).”

Lee tells Prog magazine: “There’s really nothing to say. I think Neil is just explaining his reasons for not wanting to tour, with the toll that it’s taking on his body. That’s all I would care to comment on it.

“We’ll get together eventually and chat about things. But in my view, there is certainly nothing surprising in what he said. Neil just feels that he has to explain with all the thousands of people asking, ‘Why no more tours?’ He needs to explain his side of it.”

In the new video footage below, Alex Lifeson and Geddy Lee talk to Q107’s Joanne Wilder about the physical toll that Neil Peart endures during a 3-hour show: