Audio samples of all the tracks that are set to appear on “Res 9” can be streamed below.

“This album represents a journey through my life,” Emmett observes, “and the idea behind a lot of these songs is me trying to figure out who I am, and why I’m doing what I’m doing. There’s a common thread of positivity here that ties into the records I was making 30 years ago. What did I learn from making them? You’ll hear all of that echoed in the grooves of this album.”

Indeed, the scope of the eleven deeply heartfelt songs on “Res 9” covers a lot of exciting aural ground, from the out-of-the-gate gallop of “Human Race” (which also features a driving 12-string contribution from Lifeson) to the testifying tones of “My Cathedral” to the whispering blues of “The Ghost of Shadow Town”, not to mention the cutting-heads guitar duels on “End Of The Line” and the touching album-closing bonus track “Grand Parade”. which reunites Emmett with Levine and Moore. The RESOLUTION9 band itself is comprised of Rik‘s touring quartet, with Dave Dunlop on guitar, Steve Skingley on bass and keyboards, and Paul DeLong on drums. Dunlop and Skingley also co-produced “Res 9” with Emmett.

Emmett is a strong believer in teamwork, and to him, the overall vibe of “Res 9” is clearly reflected in the brotherhood and camaraderie shared amongst all the artists who made this special music together. “You can’t accomplish this kind of project 100 percent by yourself,” Emmett believes. “It takes a lot of things working together to make something like this happen. I come back to the old saying that goes, ‘Success has many fathers, and failure is an orphan.’ I knew that I had to spread it all around. It’s important I keep the guys in my band pretty happy.”

Lead track “Human Race” masterfully sets the positivity table for what’s to come. “I’ve been around the block a few times, and one of the things I like about the lyrics in ‘Human Race’ is when we get to the last verse where it says, ‘I am still this guy. I still live this.’ That’s very true,” Emmett acknowledges. “There’s also a line in there about raising a joyful noise — and I still want to do that too.”

Lifeson added some period-perfect 12-string guitar alongside Emmett and Dunlop to buttress the impact of “Human Race”, and he says he found it quite an honor to play with and for his lifelong friend. “When Rik asked me to play on his new album, I didn’t hesitate for a second,” Lifeson reports. “He’s the consummate musician, a wonderful guitarist, and a terrific person, and it’s always my pleasure to work with him any chance I can get. There is a rock purity in his songwriting and performance, and it’s just so much fun to get together and throw ideas around. He’s always so up and open for anything — even a notoriously uncooperative Rickenbacker 12-string!” Dunlop points out the way RESOLUTION9 meshed with Lifeson “stands as a great example of the collective efforts of the brotherhood.”

Another one of “Res 9”‘s honored guests, LaBrie, lent his own considerable talents to a pair of tracks, “I Sing” and “End Of The Line” (the latter of which also features Lifeson taking the third guitar solo), and he jumped at the chance to record with his fellow Canadian.

“I’ve been extremely blessed and fortunate to meet so many great musicians and beautiful people throughout my career, and to have the opportunity to collaborate and record with some of them is really icing on the cake,” LaBrie notes. “What a thrill it was to record with Rik, who is such an incredible musician and overall down-to-earth cool guy.” About the slow-build manifesto of “I Sing”, Skingley enthuses, “James sang his ass off on that song!” Adds Dunlop, “I enjoyed tracking the guitars on ‘I Sing’ the most because I got to go crazy with several layers of guitars — and I also got to channel [PINK FLOYD‘s] David Gilmour on the outro.”

A fair amount of the album was recorded and mixed at Mississauga, Ontario’s MetalWorks Studios, a location where Emmett, Levine and Moore (who owns the studio) recorded many of TRIUMPH‘s greatest works — and it’s also where the trio convened to tackle “Grand Parade”. Clarifies Emmett, “The TRIUMPH song is a bonus track. That’s the best way to position it. It’s like ‘Suitcase Blues’ [the last track on TRIUMPH‘s 1979 million-seller, ‘Just A Game’] — or ‘Her Majesty’ at the end of Abbey Road!”

Having TRIUMPH involved on “Res 9” to some degree was always on the table. “I play ‘Suitcase Blues’ as the last song of the night in the encore for my acoustic shows. I dedicate it to Mike and Gil and the fact that they gave me the latitude to do the crazy things that I do,” Emmett laughs. “As I was developing the lyrics for ‘Grand Parade’, I started thinking, ‘Wouldn’t it be great if I could get Mike and Gil to play on it? Wouldn’t that just bring everything full circle?’ One thing led to another, and there we were, recording in MetalWorks. Things just lined up perfectly.”

Levine had a great time in the studio with his former bandmates. “We rocked it up a bit, and Gil made the drums heavier than they were on the demo,” the bassist notes. “Once I paid deeper attention to the lyrics, I really got into the ‘let’s wrap up this late night’ kind of feel to it. I think it turned out really fantastic. I told Rik I felt it was a really cool tune, one that was very personal for all of us. I’m really, really proud of it, and it was great to work with both Rik and Gil on it. It was really neat.”

Moore wholly enjoyed the “Grand Parade” experience. “It was really a pleasure to have Rik and his band at MetalWorks, and getting to see him there every day was just like the old days,” the drummer recounts. “I always liked how Rik was able to bring another dimension and another color palette to what we were doing, and I like the spacious bass and drum tracks we did together. That’s what’s always been in my wheelhouse, as far as my playing is concerned. I’m really happy with how this song turned out. I hope we get to do it again.”

Emmett‘s ultimate goal for “Res 9” is to connect with as many people as possible. “The context of this entire album for me was, ‘Wow, somebody tossed me a lifeline,'” he concludes. “I still want to make positive music and offer people something that’s motivating and inspiring — and I want to do it for myself too. I need music, and music can provide that lifeline for me.” Mission accomplished: “I’ve got a thirst for life,” as Emmett sings on “Human Race”. And you’ll find that thirst being quenched quite handily in the very heartbeats that percolate within all eleven tracks of “Res 9”. Drink up. 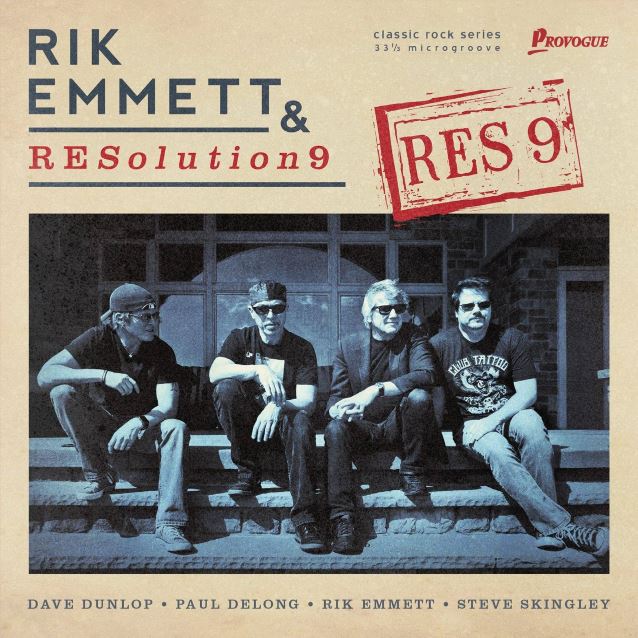