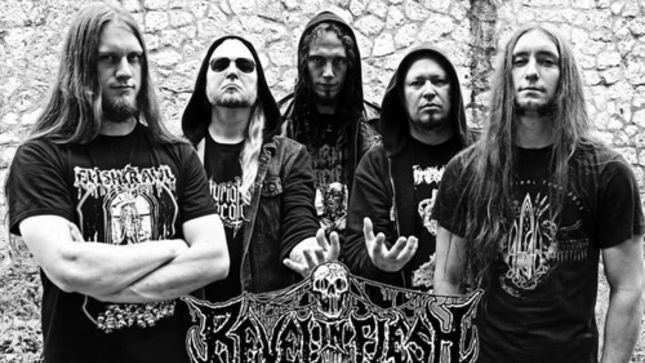 Swabian death metallers Revel In Flesh will unleash their new and fourth full-length-onslaught, entitled Emissary Of All Plagues, on December 2nd via Cyclone Empire.

The album was produced by guitar master Maggesson at the band´s own Vault M. Studio. For mix and mastering they worked again with none other than Dan Swanö (Bloodbath, Edge Of Sanity, Nightingale) at his Unisound Studios.

The tracklist and cover artwork will be revealed follow soon.

Mainman Haubersson comments: “After intense months of working and recording we are damned excited about releasing “Emissary of all plagues” upon mankind! It’s probably our darkest and most melodic output thus far! Expect a haunted trip to the darkside mixed with the previously known Revel In Flesh death metal brutality! We are looking forward to present those new tracks on stage as soon as possible! The restless servants of the Deathkult are back!”

Here´s what the Dan “the legend” Swanö has to say about Emissary Of All Plagues: “Another fantastic worship at the altar of SweDeath. To create the best album so far into their career is astonishing. Both me and the band feel this our best sonic co-operation so far, and to me personally, it is extra cool to finally have nailed what I believe to be the ultimate tribute to the SweDeath guitar tone! It takes more than just a HM2 pedal to get the right ‘vomiting’ to occur ‘inside’ the distortion! Make sure to check out the vinyl version for a full dynamic mix of this amazing slab of true fucking death metal!”