Over the last three decades, Chad Smith has become one of the most recognizable figures in rock and rhythm. As drummer for the RED HOT CHILI PEPPERS, he’s sold more than 80 million albums and been inducted into the Rock And Roll Hall Of Fame. With supergroup CHICKENFOOT and the BOMBASTIC MEATBATS, he’s expanded into a variety of musical genres with an extraordinary assortment of collaborators. Now, Smith — in conjunction with creativity house SceneFour — will debut his fine art collection “Parallax”, which utilizes sophisticated technology to visually harness Smith‘s preternatural drum skills, previously seen only through sound, now rendered gloriously visible.

Smith was born and raised in St. Paul, Minnesota, where he first picked up the drumsticks at the age of seven. The RED HOT CHILI PEPPERS were told that Smith “eats drums for breakfast” shortly before he was tapped as their permanent drummer in 1988. Seven Grammys later, Smith is #10 on Spin‘s list of the 100 Greatest Drummers of Alternative Music, and has recorded with Johnny Cash, John Fogerty, the DIXIE CHICKS, Kid Rock and Dick Van Dyke, with whom he recorded the 2010 children’s album “Rhythm Train”, named by MTV one of the best children’s records of all time.

Completed in Los Angeles in 2015, Chad Smith‘s “Parallax” collection is the latest in the rhythm-on-canvas medium pioneered by art team SceneFour and a select group of the world’s most acclaimed drummers, including Mickey Hart (GRATEFUL DEAD), Carl Palmer (EMERSON, LAKE & PALMER), and Rick Allen (DEF LEPPARD). Using lit drumsticks in much the way a painter would brushes, SceneFour‘s innovative techniques capture Smith‘s strokes as he plays, making for a series of 13 unique, limited-edition canvas pieces, all numbered and individually signed by Smith.

A portion of all proceeds will benefit Camp Korey, a charity for children with serious medical conditions. 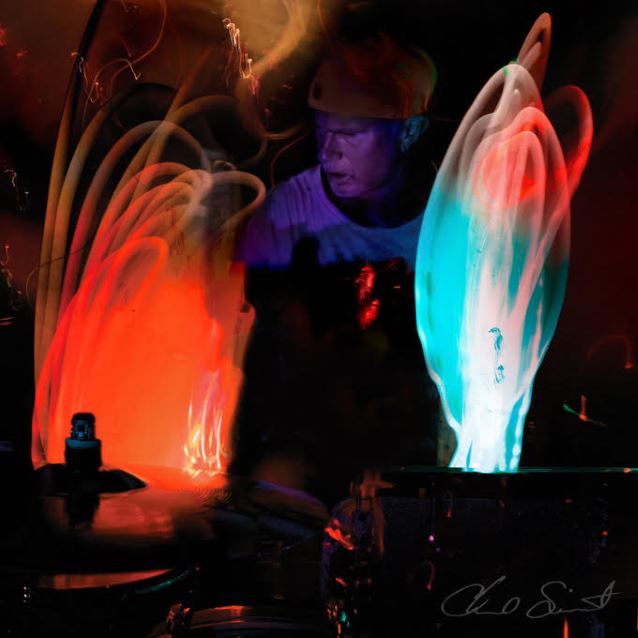