The official video for “Seasons Of The Black”, the title track of the new album from the German heavy metal trio RAGE, can be seen below. The follow-up to 2016’s “The Devil Strikes Again” is being released today (Friday, July 28) via Nuclear Blast.

RAGE leader Peter “Peavy” Wagner stated about the “Seasons Of The Black” title track: “The song is very personal. It is about a failed lifelong dream. Imagine being stamped to the ground and looking at the broken pieces of your existence. This, sadly, is a destiny that many people have to share. Most of the songs on the album include a very gloomy view of the world, so we thought ‘Seasons Of The Black’ would be suitable for the entire album.”

“Seasons Of The Black” was recorded in February and March 2017 at Megafon Studios in Burscheid, Germany and at Soundchaser Studios in Zandhoven, Belgium. Its production was handled by RAGE, while Dan Swanö (MARDUK, OPETH, KATATONIA) took care of the mix and mastering at Unisound Studios in Grefrath, Germany.

“Our fans are getting RAGE metal of the very first grade,” says Peavy. “We’ve been able to bring the band’s typical trademarks into eleven new songs, and we’re sticking to the course that we forged on the last album! This means hard and very catchy compositions that also sound thrash, aggressive and epic.”

Since RAGE was revamped in 2015, the three bandmembers have fully adapted to each other and the lost harmony has been fully restored. “We are even better matched with each other,” says Peavy. “We offer new ideas to each other like we’ve never done something else before. It also happened that we created a whole new song within just two hours from start to finish, from scratch. Regarding the production, we were also able to prevent some complications, which had been an element of the last album due to a lack of experience. This time, everything worked perfectly.”

Guitarist Marcos Rodriguez and drummer Vassilios “Lucky” Maniatopoulos have been longtime RAGE fans from the very beginning. Their input also leaves its mark on their second album with RAGE. “Marcos and Lucky well know the ‘classic’ style-creating spirit of RAGE, so to speak, and on a personal level we all really like each other as well,” Peavy says. “This contributed to the possibility of continuing to develop and expanding the band’s spirit.”

The stylistic connection between “The Devil Strikes Again” and “Seasons Of The Black” is also visually reflected in the artwork, once again created by graphic artist Karim König. “We developed the idea together,” says Peavy. “In this way, we want to show that both albums belong together in their own way. I modelled the sonically inspired sculpture that dominates the cover on my own. As a basis, I used a very rare skull from my collection, which I poured myself and then re-modelled. Karim created the gloomy landscape with the Golgotha Hill.” 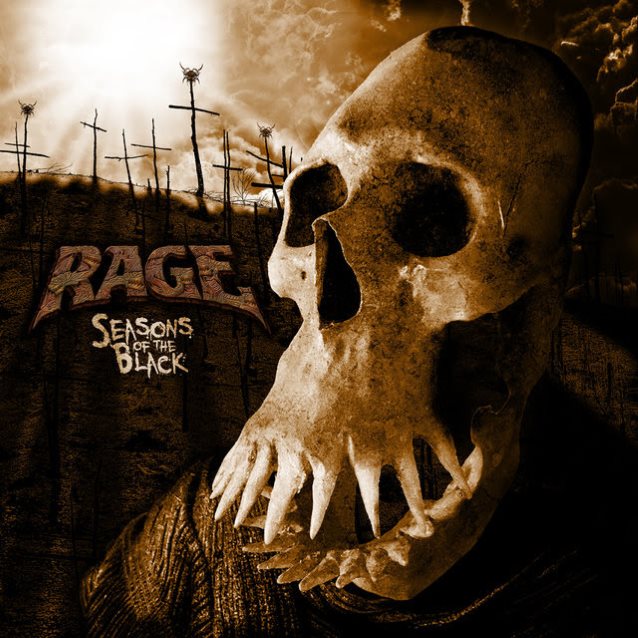