Two years after POSSESSED‘s split, Becerra was the victim of a failed armed robbery attempt, subsequently leaving him paralyzed from the chest down and sending him into a spiral of drug and alcohol abuse. POSSESSED was reactivated by Torrao in 1990 with a completely different lineup, but only released two demos before dissolving in 1993. Becerra then reformed POSSESSED in 2007 with his own lineup, which is gearing up to release their first studio album in 33 years, “Revelations Of Oblivion”.

In a recent interview with The Underground Metal Gamer (video below), Becerra was asked about the recovery process after being shot by two masked gunmen.

“I’ve been in a wheelchair longer than I’ve been walking,” he said. “It’s my normal. It wasn’t so much of an accident — I got shot by two different guns in a robbery. I was doing concrete construction. I worked something like 13 hours that day. I stopped to get a pack of Camels [cigarettes] and I guess I flashed a hundred [dollar bill] and on the way out, two guys in hoods, little ninja guys came running up with guns: ‘Give me all of your fucking money.’ I kind of resisted; I should have just given them the money, but I was fucked, I was cornered. It’s not the first time I had a gun pointed at me and I knew they meant business. We scuffled, there was no way out of it and I ended up getting shot a couple of times. The first guy pushed a 9-millimeter to my chest [points to bullet hole]. It broke through the ribs and shattered the lungs and stuck on in the spine, so I still have a 9-millimeter slug stuck on the vertebrate T3. I think the second guy was covering me from about 15 feet away, so there was nowhere to run. It was more like a knee-jerk reaction because the first shot was ‘pow!’ and right after, ‘pow!'”

He continued: “I kind of foresaw that. I put my hand up in a defensive mode. It didn’t matter. The 22-caliber would have hit me in the forehead, but instead it clipped my finger off backward. You can see how it’s still bent. It was like that [shows finger], but we did a bunch of rehab in the spring, so that clicked off and that was squirting out blood like some Monty Python thing. I pinched my armpit and tourniqueted it and played dead. [The shooter] came up to my forehead and his gun jammed and he was slapping the side of his gun and trying to pull the trigger to finish the job. I guess they just panicked and as they ran off, his gun un-jammed and they were just firing over their shoulders: ‘Pow! Pow! Pow!’ all these bullets were hitting around me and I was like ‘Oh, fuck!’ Then I scooted and hid under this Volvo, just playing dead for about 45 minutes. This little girl came by and she obviously was a drug addict, kind of a crackhead girl and I was, like, ‘Hey, you got to call 911.’ She said ‘I can’t. I live here. These guys will fuck me up.’ I said ‘I’ll give you ten bucks.’ She said ‘Ten bucks?’ I reached in with my good hand, gave her a bloody ten-dollar bill and about 45 minutes later, one solo cop came up and he was like, he couldn’t have been more than 21, 23 years old. He was, like, ‘This is my first solo! I’m freaking out. I can’t believe this is happening.’ I said, ‘Call an ambulance.’ He was, like, ‘Oh, yeah…’ That was the first time I was glad to see the police. He just kind of covered me until the ambulance came and that was it.”

Now wheelchair-bound, Becerra calls the ensuing period the “five dark years” in reference to a spiral of drug and alcohol abuse. “I really didn’t handle it well,” he said. “I essentially tried to kill myself with drugs and alcohol. I lived alone for five years and basically just wrote and listened to a lot of demo tapes that were sent and got thousands of fan mail asking me to come back. It was always the plan, but I wanted to do the things in life that I felt that I needed to do as a man. I’m not saying this is everybody, just for me, I didn’t want to wake up and be 50 and all I ever had done is play satanic death metal. I’ve always been kind of afraid of college. I went to college and made straight As, alpha gamma sigma and webmaster and was one of 20 gold robes. I did that. I got my four-year [degree] in three and a half years. I got married and had a couple of beautiful kids. Then I got divorced and that was time to bring POSSESSED back. I was already playing and touring by then and when you’re gone all the time, it’s hard to maintain a solid relationship. You got to give a lot to be in a death metal band. You just got a do it. I’m still really tight [with her]. Me and my ex-wife are still best friends. It was amicable. It’s a win-win. I got two beautiful kids and a band and everything.”

“Revelations Of Oblivion” is due May 10 via Nuclear Blast. The album was recorded at NRG studios and Titan Studios with Becerra as executive producer and Daniel Gonzalez as co-producer for the album. Mixing and mastering was handled by Peter Tägtgren (HYPOCRISY, PAIN, BLOODBATH) at Abyss Studios in Sweden. For the artwork, the band enlisted Polish artist Zbigniew Bielak (PARADISE LOST, DIMMU BORGIR, DEICIDE, GHOST, GORGUTS) to create a piece that brought back the notion of true fear that was once associated with the idea of evil. 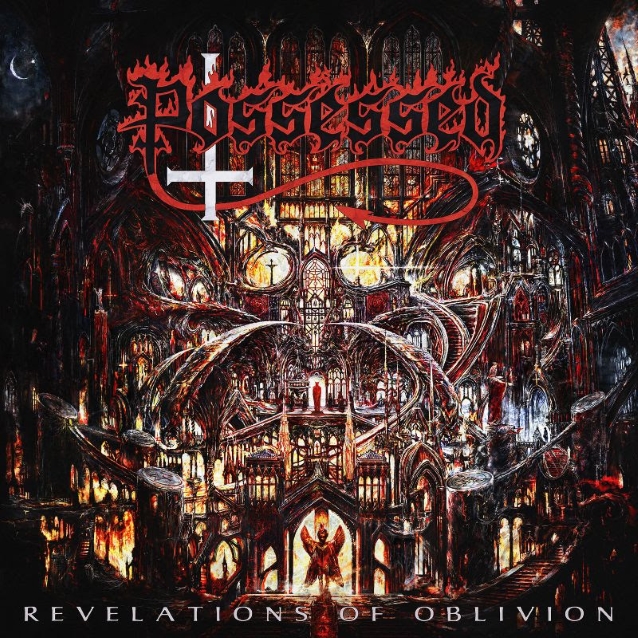