The official 2015 live video for the song “Ozena” from former PANTERA and current DOWN frontman Philip Anselmo‘s SUPERJOINT RITUAL project — now known simply as SUPERJOINT for legal reasons — can be seen below. The clip was filmed on July 26 at the House of Blues in New Orleans, Louisiana and was shot by the Cement Level Crew.

Asked by Full Metal Jackie what made him start thinking about resurrecting SUPERJOINT for an appearance at last year’s Housecore Horror Film & Music Festival, Anselmo said: “Well, I didn’t think at all about it, you know. It was more peer pressure, so to speak, you know. I always considered SUPERJOINT pretty much finished until, really, Corey Mitchell [true-crime author and Housecore Horror Film Festival co-founder] — rest in peace; the hardest-working man for the Housecore Horror And Film Festival, who passed away untimely last year — it was really his idea, and he kept begging and kept begging and kept begging. And I was, like, ‘No, no, no, no, no, no, no.’ And then Jimmy Bower [SUPERJOINT and EYEHATEGOD guitarist] got into it, and he was, like, ‘Why not, man? Let’s do it.’ Then — oh, God — we ended up in the practice room, and next thing you know, we were having fun, and then we played Housecore Horror Fest part 2, and that was fun, and then the offers started coming in. And, you know, I guess at this point, it’s, like, why not? You know, let’s go out and have a blast.”

Anselmo also talked about SUPERJOINT’s new lineup, which includes guitarists Kevin Bond (CHRIST INVERSION, ARTIMUS PYLEDRIVER) and Jimmy Bower (DOWN, EYEHATEGOD), drummer José Manuel Gonzalez (WARBEAST, PHILIP H. ANSELMO & THE ILLEGALS) and bassist Stephen Taylor (PHILIP H. ANSELMO & THE ILLEGALS, WOVEN HAND, 16 HORSE POWER). He said: “We already knew that we were gonna go with a different drummer. And one thing that people don’t really recognize is that SUPERJOINT‘s gone through three bass players over time. And, you know, obviously, Hank [Williams] III himself was probably the most heralded and popular and beloved. And we still feel this way too. It’s just a matter of, you know… Truth, Hank has been working his brains out to get to where he is at as a solo artist and… Either way, he’s a hard-working man. And, you know, he basically doesn’t have time to do it, but it’s understood, and he gives us his blessing and all that stuff. And he’s always welcome to come up and jam with us whenever he has free time, which is basically never. But he’s always… The door’s always open for Hank and all that stuff to come up and jam. But, more importantly, we got Steve Taylor and Blue from THE ILLEGALS and WARBEAST, respectively, to play drums and bass [sic] for SUPERJOINT. I’m very familiar with those cats. And Jimmy and Kevin, you know, love those guys. So practice has been smooth; everything’s been real smooth. And it is fun — I’ve gotta admit it — in this room full of crazy people.”

Asked if getting together a tour could lead to a new SUPERJOINT album, Anselmo said: “Well, I will let you know that, I think, right now, we have five new pieces that are pretty good. I think it’s a decent start. But I think that Jimmy‘s been out with EYEHATEGOD for quite a while now. But we all need to get back in the jam room and reassess what we have. And I think that there is a good chance we could put out a record. Like I say, there is material that we’ve been working on. But would I say it’s close [to] finished? No, I would not. I would say it needs some tender loving care, and, I guess, once we feel like we are at a certain point with the songs, then we’ll decide if we’re gonna move forward or just have extra stuff to put out there for kicks.”

According to Anselmo, the direction of SUPERJOINT‘s new material will be very similar to that one the band’s first two albums, 2002’s “Use Once And Destroy” and 2003’s “A Lethal Dose Of American Hatred”. “It won’t sound any different, because myself, Jimmy and Kevin have always been the main writers in SUPERJOINT anyway, so, really — for the most part, really, me and Jimmy. So it shouldn’t sound much different at all,” he said. 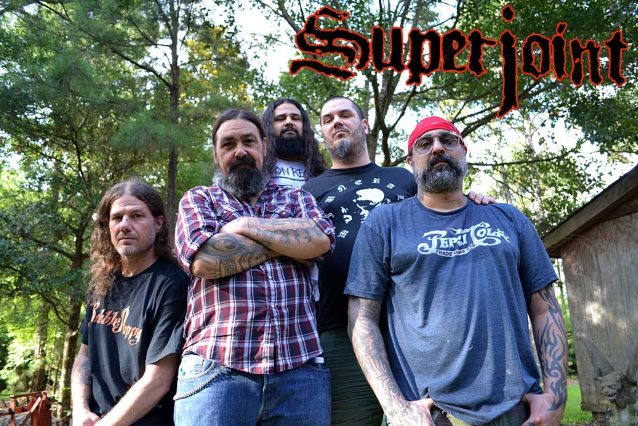