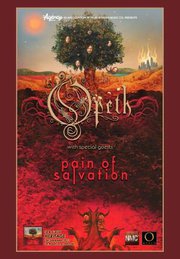 Following the turbulent and successful release of “Road Salt One” in the year 2010 (with numerous chart entries, Russian train bombs, the appearance at the huge Swedish “Melodifestivalen” as well as highly controversial video clips) and the touring activities in its support which climaxed this year with shows in India and South America in 2011 as well as last month’s triumphant appearance at France’s Hellfest, Swedish PAIN OF SALVATION can now finally reveal that the “Road Salt Two” album is scheduled for a September 26th, 2011 release date in Europe via InsideOutMusic.

But the exciting news don’t stop at that, as PAIN OF SALVATION have just been confirmed as support act for a massive European tour together with Metal innovators OPETH. The so far announced dates are as follows:

Additionally and prior to those dates, PAIN OF SALVATION will kickstart the touring cycle for the “Road Salt Two” release with some weeks of headlining shows in other European countries with support from the Finnish band Von Hertzen Brothers (http://www.vonhertzenbrothers.com).

PAIN OF SALVATION’s Daniel Gildenlöw checked in to comment about the tour as follows:

“It is with great pleasure we announce the first batch of tour dates for ‘Road Salt Two’. Never has an album hungered more to get on the road, and we long for it to take us out there. Separately, “Road Salt One and Two” are pretty impressive animals, but together they turn into something formidably fearsome. A perfect beast – a creature built for the road.

We have really handpicked both bands we will be touring with this autumn. I have wanted to present Grammy awarded Von Hertzen Brothers to our fans ever since I first heard their “Love Remains The Same” album last year, and it will be an honor to have them open for us on our Eastern Europe headline leg.

As for Opeth, well, first I heard from Mikael that he listens to “Road Salt One” while jogging, and then he went and put it third on his ‘Best Albums of 2010’ list. What could I do? Since I neither jog nor listens to contemporary music very much, this was our only means of sucking up and set the scale back to equilibrium. I mean, we already share a lot of our fan bases and our tastes in music. What would be more natural than to share stage? Alright, seriously speaking, we really look forward to touring with this super-nice band. We’ve played the same festivals a few times, and it always ends up with us hanging out and having a great time discussing obscure music, old guitars and food. Yes food, I am serious. Mikael owes me a tuna dinner.

Despite the dense schedule of October, November and December, this only marks the start of the Road Salt Two touring that we are currently planning for 2012.”