BLACK SABBATH singer Ozzy Osbourne and bassist Geezer Butler spoke to AZCentral.com about the band’s decision to call it quits after completing “The End” tour in early 2017.

“We just all decided that we wanted to do one last tour,” Butler said. “We’re all getting up there in age, and while we’re still at the top of our profession, both musically and aesthetically, we wanted to go out on the top and we feel that this is the right time to do it. So the natural thing to do is to all agree on one last tour. And once we agreed on one last tour, that was it. We just set it up. And we all agreed that there won’t be any more Sabbath after this. It’s like a natural progression kind of thing; a natural end to the band.”

Ozzy, who said that there was no possibility of SABBATH changing their minds, once again made it clear that he has no intention of retiring from the business.

He continued: “BLACK SABBATH, it’s been up and down. And it’s good that we’ve come back together at the end, more or less, to finish on a high note. It’s a good way to do it. To come back and be friends with my buddies who I started up with all those years ago, it’s a closure for me to have a chapter of my life which I can say, ‘Well we came, we saw, we had a good time, and now it’s over.’ And so it’s like any relationship. I’m glad we ended up having more or less whatever has gone on between us over the years. We’ve got rid of all that. And we are friends again. So, I mean, it’s good that, at the end of my days on this planet, I can say, ‘Well, we ended okay,’ you know?”

Asked how it feels to be pulling the plug as such a huge part of his life in music, Osbourne said: “I mean, you can’t do it forever. If you’re not careful, you’d become, ‘Oh, it’s them again,’ you know? It just felt right for me.”

SABBATH will bring its storied career to a close in the band’s native England, with seven shows booked there in January and February. The last two, on February 2 and February 4, will take place in SABBATH‘s hometown of Birmingham and will likely be their final shows.

The original lineup of SABBATH came together in 1969 with Osbourne on vocals, Tony Iommi on guitar, Butler on bass and Bill Ward on drums. That lineup recorded and toured through 1978, and periodically reformed through the ’90s and 2000s for live work.

They regrouped again in late 2011 for a new album and tour, although Ward dropped out after just a few months. The remaining trio issued the “13” album in 2013 and backed it with a successful world tour — despite Iommi being treated for lymphoma since 2012. 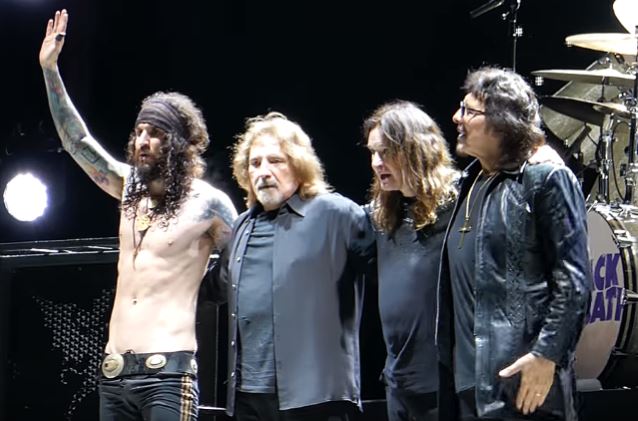