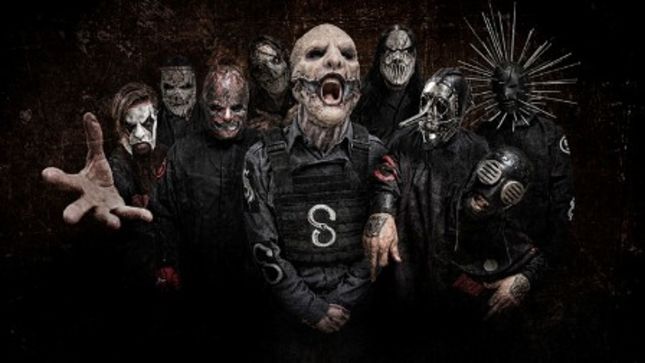 According to Highland Community News, 17 people were arrested during Day 2 of Ozzfest Meets Knotfest at San Manuel Amphitheater in Devore.

The double-header music and lifestyle weekend like no other on the planet took place on Saturday, September 24th (Ozzfest) and Sunday, September 25th (Knotfest) at San Manuel Amphitheater and Festival Grounds in San Bernardino, CA.

As Ozzfest celebrated its 20th anniversary this year, a variety of artists who have performed at the event both in The US and around the world shared some personal stories and thoughts about its history. Created in 1996 by Sharon and Ozzy Osbourne, Ozzfest was the first national music festival of its kind dedicated to hard rock music and breaking new artists. In the years that followed, it became one of the most successful touring packages in music history. This weekend, Ozzfest (Saturday, September 24th) will team up with Knotfest (Sunday, September 25th) at San Manuel Amphitheater and Festival Groundsin San Bernardino, CA for Ozzfest Meets Knotfest, the biggest metal festival in North America ever!

First up, Corey Taylor (Slipknot), who headlines Sunday’s Knotfest, tells his Ozzfest story: “You have to go back to 1999, our first major tour. Ozzfest gave us an incredible opportunity and we were able to really jumpstart our career from there…The great thing about being a part of that Ozzfest was that you were immediately a part of a family. And then when we did it subsequently in 2001, 2004, even the one-off in 2005, it was like coming home. The Osbournes themselves really believed in this band and always have. So when we kind of started spitballing the idea to do Ozzfest Meets Knotfest, in a way it was for us to kind of put together something amazing for the fans, but also to pay respect, as an homage pay a little bit back to a festival that really helped make this band what it is and to give a little nod to a brand that, to this day, when you say to a metal fan, ‘Ozzfest,’ they know what that means. It means excitement, it means something for our genre, it means something strong, it means bringing together a family-and that’s kind of what Knotfest is trying to do, but we wouldn’t be able to do that if we hadn’t first come from Ozzfest.”

Judas Priest: “A full on relentless total assault of the senses! The rest is a blur of hails and good times with our fellow screamers shredders and pounders both onstage and off!”

Dave Mustaine (Megadeth): “I got to go on one of Tony Iommi’s morning walks that were part of his exercise routine, and we talked as if we had known each other for years. I gave Ozzy a Frank Sinatra golf club I’d gotten from Frank’s tournament in Palm Springs and he hugged me, which was supposed to be a very sacred thing with the Prince of Darkness. Most memorable was a talk I had with Sharon about the aggregate of all metal musicians and how we are all ‘salt of the earth’ as she called us. We laughed that there was only one who had been born with a silver spoon in its mouth, and I felt truly blessed to be her friend. I’m really looking forward to this show and the remaining shows with Black Sabbath.”

Zakk Wylde (Black Label Society): “The Ozzfest is the hard rock fraternity gathering granddaddy of them all!!!”

Nikki Sixx (Motley Crüe): “Ozzy gave Motley Crüe it’s big break taking us under his wing for our first big arena tour and then later we were asked to rejoin our friend on Ozzfest. We are so proud to be part of the history and legacy of Ozzy and Ozzfest. Ozzfest has been one of the biggest and proudest moments for all rock music.”

Robert Trujillo (Ozzy Osbourne, Metallica): “What a huge honor to have been a part of Ozzfest. I was there from the very beginning back in 1996, and witnessed the birth of a Rock ‘n’ Roll movement launching so many great bands as Ozzy has always done. I remember System Of A Down when they were rolling in a beat-up RV being held together by duct tape, always ready to conquer and kick ass! But my biggest honor was improvising a spontaneous move called the ‘Crab Walk’ with my hero Mr. Ozzy Osbourne in Phoenix, Arizona in ’96. From Black Sabbath to Slayer to Slipknot to Tool to Pantera to Meshuggah etc. (Oh yeah, Metallica, Dallas 2008), always a historic moment and what a fucking party! Thank you Sharon and Ozzy. Happy 20 years Ozzfest.”

Scott Ian (Anthrax): “Playing Ozzfest UK on the main stage right before Black Sabbath was not just a highlight of my career in Anthrax, but one of the coolest moments of my life. Thanks Sharon and Ozzy!”

Charlie Benante (Anthrax): “Well…We were on tour with Ozzy and we had a night off in Buffalo. I was going down to the restaurant and as I’m walking in, Ozzy was walking out with his assistant. He sees me and puts his hands on my shoulders and shakes me and says, ‘Have you tried the wings? They’re fabulous!'”

Randy Blythe (Lamb Of God): “In 2004, my band played Ozzfest for the first time, and my liver will never be the same. We were one of the three headliners on the second stage, and while the main stage acts that year were pretty spectacular (I mean, where else were you going to see the original Black Sabbath lineup, Judas Priest and Slayer all on the same stage? It will never happen again!), the second stage that year had such a savagely familial vibe–we were all out for blood, and we were all in it together. Epic cook-outs nightly, stolen golf-cart wrecks, the infamous Shirts-off Crew that would bum-rush security and just take over whatever area we felt like (several of us bear S.O.C. tattoos from that tour), wild after-parties–it was completely and utterly off-the-freaking-meat-rack INSANE. I got ‘called into the principal’s office’ a few times (translation: I did something crazy/offensive/freakishly stupid on festival grounds and got yelled at by Sharon Osbourne), I got chased by police for taking Hatebreed’s four wheeler rooting onto some residential street and escaped into backstage just in the nick of time, I woke up every morning felling like hammered shit in 100 degree weather then immediately went on stage to play some of the most fun shows of my life; it was a fine time to be a younger man. I think Ozzfest ’04 may have taken a few years off my life, and that’s OK–it was the time of my life. I wouldn’t wanna do it again–hell, I couldn’t do it again (it would kill me)–but I don’t regret a second of it. Thanks Ozzy & Sharon for the memories. It was truly an honor and a blast. OZZZZZZZZFEEEEESSSSSSSSTTTTTTT!!!!!!!!!”

Mike D (Killswitch Engage): “In 2003, there was change in the air, Nu Metal was dying, and Ozzfest was the catalyst. Before the start of tour, we were told, ‘If you are not on the main stage, do not expect to sell a lot of shirts.’ Much to everyone’s surprise, we sold out our entire six-week shirt order in the first three days. That was when we knew that the tide turned and a new breed of metal had arrived. Killswitch Engage, Shadows Fall, Sworn Enemy and Cradle of Filth had taken over the second stage, and made it their own.”

Max Cavalera (Soulfly): “I have lots of kickass memories from Ozzfest! Lynn Strait running buck naked through the dressing rooms and surprising Sharon…my son, Richie, singing Bleed…the making of the Primitive video…our kids stealing golf carts with the Osbourne kids and running wild…Sharon and Ozzy made history with Ozzfest!! It was the ultimate traveling Metal circus!!! We all became family! Fuck Lollapalooza!!”

Ben Falgoust (Goatwhore): “We have been associated with Ozzfest in the past and are grateful to be playing it this year, but being part of Black Sabbath’s final West Coast show is another legendary experience to be affiliated with and be able to witness first hand, taking in every element of a band that has been a great influence on all levels in the metal world. Also, all the opportunities Ozzfest has given to countless freshly-emerging metal acts to forge new paths and give people new levels of extreme music to connect with and hear… that doesn’t exclude this year. Tons of acts that have been pretty damn strong in the underground metal community will be making their first appearances at Ozzfest Meets Knotfest, as well as repeat acts that have been a part of it in the past. So, when you come to see Black Sabbath out West for their last time, come early and be a part of the future of metal, as well as it’s legendary past.”

Zack Simmons (Goatwhore): “We are very honored to be a part of Black Sabbath’s last ever California performance and Ozzfest’s 20th Anniversary. It’ll be a ripping day of heavy metal and a bittersweet farewell to the godfathers of the genre.” 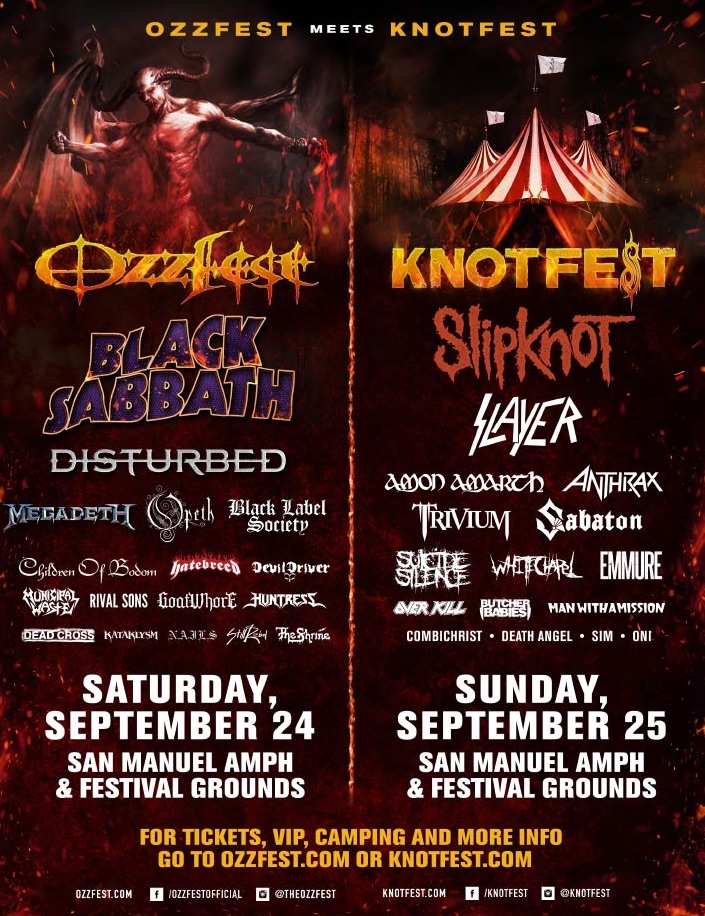