Opeth’s new album, Sorceress, their first for Nuclear Blast via the band’s imprint label Moderbolaget Records, is proof chief architect Mikael Åkerfeldt has a near-endless well of greatness inside. From the album’s opener “Persephone” to “The Wilde Flowers” and “Strange Brew” to the album’s counterpart title tracks “Sorceress” and “Sorceress II”, Opeth’s twelfth full-length is an unparalleled adventure, where visions cleverly and secretly change, colors mute as if weathered by time, and sounds challenge profoundly.

”The new album Sorceress is our 12th studio album since our beginnings in 1990,” says Åkerfeldt. “I find it difficult to understand that we’ve been going on for 26 years, let alone that we’ve made 12 records now, all of which I am very proud of. Sorceress is no exception. I love this album, as does the whole band. I wrote the music during 5-6 months and we spent only 12 days recording it at Rockfield studios in Wales. I find that once again we’ve taken a step forward. Or sideways, Or backwards. Somewhere!? It’s different! It’s extremely diverse. And if I may say so myself, extremely good. I feel the right to say that since I like to think I know this band better than anyone on the planet. Also, I always manage to detach myself from the record and listen as a fan. It’s a fine little record. My favourite in our discography right now. Of course. That’s how it should be, right? It’s both fresh and old, both progressive and rehashed. Heavy and calm. Just the way we like it. Hopefully there’ll be others around the globe sharing this opinion. It was a joy to make it. A fucking joy to record it, and a sheer joy listening to it. So there you have it!”

For Sorceress, Opeth returned to Rockfield Studios in Wales, also home to pivotal releases from Queen, Rush and Judas Priest, where the Swedes had tracked Pale Communion in 2014 with Tom Dalgety. The band spent 12 days recording at the countryside venue among its serene and inspiring surroundings. The result is nothing short of a powerful and intriguing record that will add yet another layer to the band’s celebrated career. 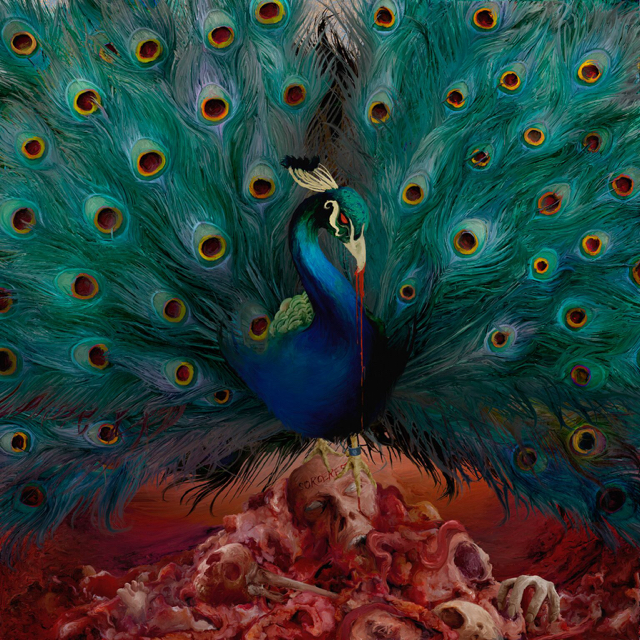 “Will O The Wisp” lyric video:

The mission of Gilda’s Club NYC is to support, educate and empower cancer patients and their families. A cancer diagnosis can be an extremely isolating experience which triggers many emotions including fear, anger, depression and an overwhelming sense of helplessness. Currently more than 4200 men, women, teens and children attend free support groups, educational lectures and workshops at the West Village townhouse or at hospital partners around NYC. More than 55 percent of their members have a cancer diagnosis, and the remaining are their loved ones – their children, partners, relatives or friends. At Gilda’s Club NYC, they believe no one should face cancer alone. 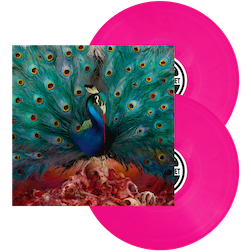 Side A
“Persephone”
“Sorceress”
“The Wilde Flowers”
“Will O The Wisp”

Side B
“Chrysalis”
“Sorceress 2”
“The Seventh Sojourn”

In celebration of the release, the band have planned three special shows at historic venues across the globe in support of the record, including Radio City Music Hall in New York on October 1st, Wembley Arena in London on November 19th and the world famous Opera House in Sydney on February 6th, 2017. Grab tickets for the Wembley Arena show at this location 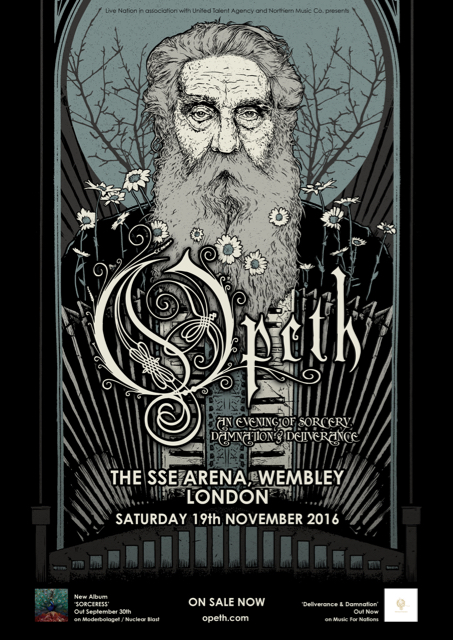 At the shows, Opeth will be performing two sets of music; one from their forthcoming album, Sorceress, together with fan favourites from their lauded catalogue, then a second special set featuring material from Deliverance and Damnation.

Frontman/guitarist Mikael Åkerfeldt states, “We’re getting pumped up for the coming Sorceress world tour. We have three shows scheduled that are quite ‘out of the ordinary’ due to their legendary status and location – Wembley Arena in London/UK, Radio City Music Hall in New York/USA and the famous Opera House in Sydney, Australia. These three shows will be completely unique in terms of songs, spanning over two separate set lists. We’ll pull out songs from our back catalogue and mix it up with newer stuff during the first set. The second set will consist of songs exclusively from the Deliverance/Damnation records, that was just celebrated with a re-release combo package by the newly revived Music For Nations label. So it’s a little bit of a celebration indeed! We’ll only play this set list three times on the whole world tour, so if you miss it, you’ll have missed it. Of course, all other shows will be treated with the same amount of respect and we’ll chisel out a nice diverse set list spanning over our entire career for every single show during the tour. We very much hope to see you there!” 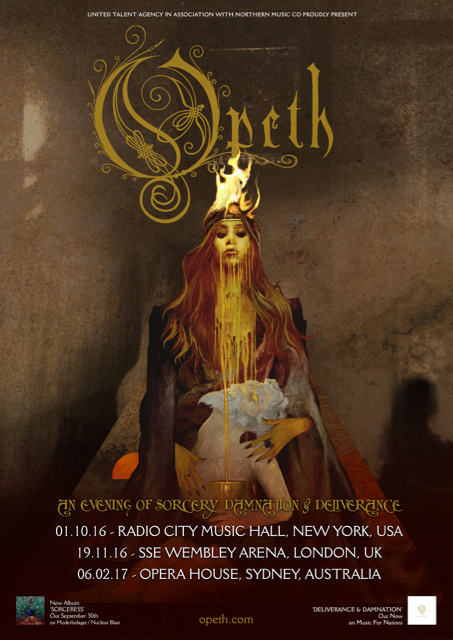 These landmark gigs also celebrate the recent release of Opeth’s Deliverance & Damnation box set, featuring the band’s classic 2002 and 2003 records packaged as one complete work – as originally intended – and their just-released Lamentations – Live At Shepherd’s Bush Empire show which is available now on DVD AND 180 gram triple LP vinyl via Music For Nations.

Opeth’s North American headline tour kicked off with a performance at Ozzfest/Knotfest on September 24th in San Bernardino, CA. The tour will be wrapping up on October 26th in Vancouver, BC.

Tour dates are listed below. To purchase VIP packages and tickets visit this location. 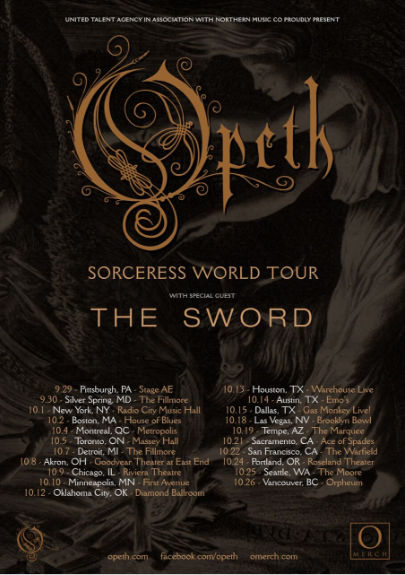 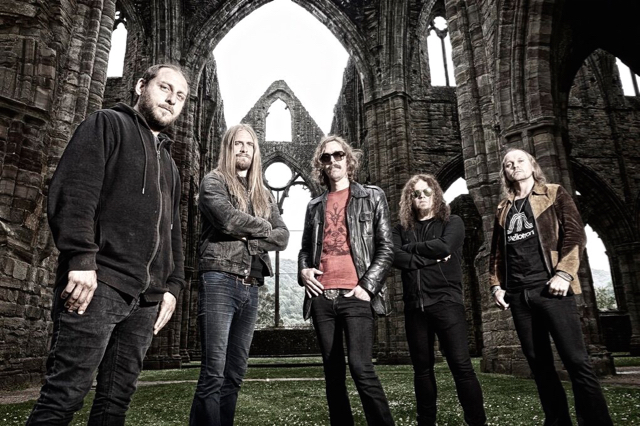