In the new clip below, Nikki Sixx from Mötley Crüe/Sixx:A.M. looks back at his iconic ‘80s fashion choices with heavy metal film director Sam Dunn in a sneak peek of Episode 104 of Rock Icons. Watch Rock Icons on VH1 Classic, Saturdays at 10/9C.

Nikki Sixx recently signed with SESAC for songwriter representation. Sixx’s songwriting catalog includes “Home Sweet Home”, which, in addition to being a top hit for Mötley Crüe, has been covered by numerous artists, including Carrie Underwood.

“I am excited about joining SESAC,” said Sixx. “They are very pro-active in pursuing opportunities for their artists and progressive with how they do their work, employing all kinds of new technologies. I anticipate a long, fruitful relationship.” 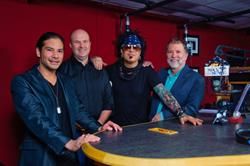 Since Mötley Crüe’s formation in 1980, the Grammy-nominated rock group has established themselves as one of music’s most revered, celebrated and notorious bands in history. The band has sold over 100 million albums globally reaching seven platinum or multi-platinum certifications. They have chalked up 22 Top 40 mainstream rock hits, including such classics as “Kickstart My Heart”, “Home Sweet Home”, “Dr. Feelgood”, “Girls Girls Girls” and “Shout At The Devil” – all written by Sixx – and honored with a star on the Hollywood Walk of Fame. Mötley Crüe also scored three Grammy nominations for Best Hard Rock Performance and countless sold-out tours across the globe, playing to millions and generations of fans. Always musical innovators, they were also the first rock band to do a rock residency in Las Vegas, setting a trend for their contemporaries.

Established in 1930, SESAC is a service organization created to serve both the creators of music and music users through music licensing and timely, efficient royalty collection and distribution. The second oldest and fastest growing performing rights organization in the U.S., SESAC is known for its diversified repertory that includes genres ranging from Adult Contemporary, Urban, Jazz, Rock, Americana, Contemporary Christian, Latin, Country, Gospel, Dance, Classical and New Age. SESAC is also the performing rights organization of choice among many of Hollywood’s most sought-after film and television composers. Headquartered in Nashville, the company also has offices in New York, Los Angeles, Atlanta, Miami and London.

Mötley Crüe will mark the end of their touring career and will conclude their two year Final Tour cycle at the end of 2015 on New Year’s Eve, December 31st at Staples Center in their hometown of Los Angeles where the band’s career began 34 years ago.

Mötley Crüe first announced plans for their 2-year Final Tour by signing a Cessation Of Touring Agreement at a press conference in Los Angeles in January 2014, solidifying the end of their Final Tour at the end of 2015.

The 2014 leg of the Final Tour was one of last year’s top grossing tours, selling close to a million tickets across 72 cities and grossing more than $45 million. “Mötley Crüe’s Final Tour has been a massive global success and a true testament to the popularity of this legendary rock band,” says Rick Franks, Live Nation’s Regional President of North American Concerts. “New Year’s Eve 2015 will mark the end of an era in rock history but there’s no doubt that Mötley Crüe’s music will influence generations of artists for years to come.”

After thirty-four years performing together, the 2015 leg of the Final Tour will see the band play Japan in February, then Australia/New Zealand in spring. In June Mötley Crüe will say farewell to the European Festival circuit with three massive performances at Download (UK), Sweden Rock (Sweden) and Novarock (Austria) Festivals before taking their can’t-miss show back to the US, Canada, and Mexico this summer for 34 final North American shows due to tremendous fan demand.

The North American dates will see the band visit cities such as Chicago, New York, Toronto, Atlanta, Mexico City and will be taking place in arenas exclusively to ensure fans in all cities get to experience the full show production of the Final Tour:

“In some of the cities, we could only reach a fraction of the fans who wanted to come see us play last year because of ticket demand so we’re coming back to those places to bring them our full production including the Crüecifly drum coaster, as well as all pyro and every other bell and whistle. Even despite the overwhelming fan demand we can only add so many new cities in North America because of our commitment to take the Final Tour global on our final year.” says Nikki Sixx (bass).

Audiences can also expect a high-energy performance from very special guest Alice Cooper, who joined the band for the Final Tour in 2014. He will be tearing up the stage for crowds across North America once again. The pairing has been roundly praised as a must-see by fans and media alike.

Coinciding with the announcement and the theme of the Final Tour, the band also released its new single “All Bad Things”. which is available for sale digitally here. The single is accompanied by a video clip of highlights of Mötley Crüe’s 34-year career which can be seen below:

Mötley Crüe are also in the process of putting together the ultimate collector’s album package for the fans to be released later this year which will include the new track, “All Bad Things” amongst many other surprises, details of which will be announced in the near future.