You will receive the following, all enclosed in a tombstone package:

– Six MÖTLEY CRÜE catalog albums on both CD and vinyl

* Too Fast For Love
* Shout At The Devil
* Theatre Of Pain
* Girls, Girls, Girls
* Dr. Feelgood
* Saints Of Los Angeles

As previously reported, MÖTLEY CRÜE‘s final concert will be screened at select cinemas across Europe, South America, Australia and Japan next month.

Filmed at The Staples Centre in Los Angeles on December 31, 2015, “The End” features the swansong concert in its glorious entirety alongside exclusive backstage documentary footage.

Having been previously shown in the States back in June, it’s being screened in select cinemas at overseas territories for one night only on October 13.

Known for their over-the-top production, MÖTLEY CRÜE did not disappoint for their last show ever on New Year’s Eve: from massive, cutting-edge pyro, including Nikki Sixx‘s bass guitar spitting fire over 30 feet into the air, and Tommy Lee‘s “Crüecifly” drum roller coaster, amongst many other spectacular elements. Lead singer Vince Neil delivered an emotional “thank you” speech to the audience, while the band supplied next-level, high-octane fueled energy, ringing in the New Year on stage with thousands of balloons raining down on the crowd. The grand finale of the show included a blow-out performance of their hit single, “Kickstart My Heart” with Nikki Sixx and Vince Neil floating above the audience in far-reaching “cherry-pickers.” Leaving fans in tears, the show concluded with an emotional encore rendition of “Home Sweet Home” from the second stage riser in the center of the audience. 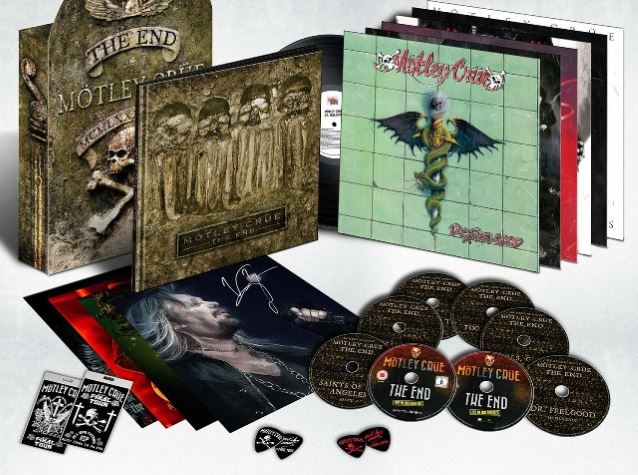