CLUTCH and FANTÔMAS — in a very rare live performance — will join iconic band TOOL along with PRIMUS, MELVINS, and DJ sets by THE CRYSTAL METHOD at Glen Helen Amphitheater in Southern California on Saturday, June 24.

CLUTCH — known for pushing the boundaries that define heavy rock music — is one of the world’s most respected and influential hard rock bands. CLUTCH is touring in support of their eleventh studio album, “Psychic Warfare”, while laying the groundwork for their next studio album.

The brainchild of FAITH NO MORE singer Mike Patton (pictured), FANTÔMAS is an anti-hero from a series of pre-WWI French crime novels, sometimes dubbed the “lord of terror.” Rounding out the lineup are Buzz Osborne (MELVINS) on guitar, Trevor Dunn (MR. BUNGLE, TREVOR DUNN’S TRIO-CONVULSANT) on bass and Dale Crover (MELVINS) on drums. This will mark the band’s first U.S. show since 2008. Regular FANTÔMAS drummer Dave Lombardo (ex-SLAYER) is unable to make the Glen Helen Amphitheater concert due to his touring commitments with SUICIDAL TENDENCIES.

This is a unique opportunity to experience TOOL‘s unparalleled sonic and visual performance, along with live sets by some of the most highly acclaimed artists beneath the picturesque San Bernardino Mountains in Devore, California, just outside Los Angeles.

Tickets for the show — which is produced by Danny Wimmer Presents and Live Nation Los Angeles — are on sale now at Ticketmaster.com. 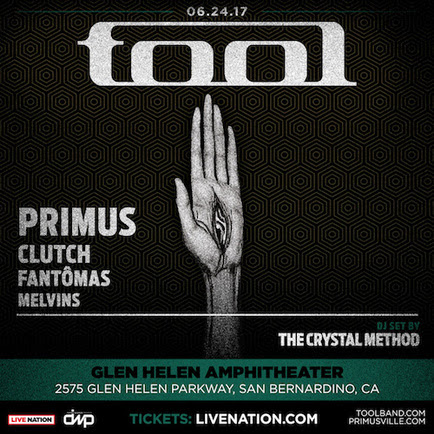