In a brand new interview with METALLICA‘s fan-club magazine So What!, drummer Lars Ulrich spoke about how the band’s latest album, “Hardwired… To Self-Destruct”, has been received by the fans and the music press alike. Asked if it’s a relief that so many people are into the new METALLICA material, Lars responded: “Without sounding too corny here, obviously as an artist you would like people to have a positive reaction to whatever you share with them. Sometimes your instincts tell you that you’re on the right track. There are other times where you’re punting. I think all of us were hoping that [the first song to be released] ‘Hardwired’ was going to at least get a reaction. I don’t think any of us expected the reaction to be that universally positive. I guess when I think about what’s been going through my mind the last couple weeks, the word ‘relief’ is not what I come to.

“I’m starting to get a little bit of distance from this record. I think that as you get older, it doesn’t get any easier, whatever it is the fuck you’re doing — whether you’re playing music or walking up a flight of stairs or trying to figure out what you’re gonna have for dinner or whatever. It just doesn’t get easier. It gets harder. I am feeling in the last few weeks, as I’m starting to get a little bit of distance from this record, that this record may be better than I was aware of, or that I had anticipated or hoped for. So I’m sort of — I don’t know — every time I listen to some of it I’m like, ‘This is pretty fucking good, actually.’ So ‘relief’ is just not the word. I guess I’m pleasantly surprised. Because if there’s one thing I’ve learned, and I have this with me all the time, and maybe I had it more with me this time, is that you can get high on the process. Right? You get so high on the process that you lose your ability to really tell what’s going on. And sometimes in the process, you can get lost or delusional or misread things or whatever, and again, referring back to what I said before, it gets harder.”

He continued: “Making a record at home, it’s not particularly easier than making a record away. I mean, you go to L.A., you go to Denmark, you go somewhere else and that’s all you got; nothing to do other than spend twelve hours a day in the studio. You make a record at home and life goes on, with kids and family responsibilities and all the rest of it. So you could argue [if you take a completely neutral look at it] we were probably less focused on this record for periods of time, including AT&T shows and Record Store Day shows and Reading Festival gigs and Lollapaloozas and all the rest of it. There was a lot of coming and going, and sometimes it was not super easy to exactly know what was going on. At the same time, I had in my mind this time, certainly more so than ‘Death Magnetic’, this constant thing about, ‘Don’t be fooled by thinking that just because it feels good, or you’re making music, or you and James [Hetfield, guitar/vocals] are getting along, or you and Greg [Fidelman, producer] are, that the music is good.’ It was a constant, almost daily evaluation. ‘Is it good? Is it great? Can it be better? Can that be better? Can this be better? Can this be better? Can this? Should that go over there?’ And all that kinda stuff. And that sort of continued until a few weeks ago when this record was basically done. I’ve heard it three times, maybe four times. Jess [Lars‘s wife, model Jessica Miller] and I, about two weeks ago, Jess and I got in the car and we drove north. Because you gotta get in a fucking car, as you know… You’ve gotta do the drive. And so until it’s passed the fucking car test… And so we got in a car, two weeks ago tomorrow, and we drove up to Healdsburg, and we got three-quarters of the way into the record, up to Healdsburg. We went to a place, had a couple beverages, and then we drove back. She was driving… She was well within the legal limits of California… And then listened to the last two or three songs and it was like, fucking, this is pretty good.”

METALLICA revealed yesterday that the “Hardwired… To Self-Destruct” is No. 1 in 57 countries, with the album going Top 3 in 75 nations and Top 5 in 105 countries.

According to music industry web site Hits Daily Double, “Hardwired… To Self-Destruct” is now likely to sell between 305,000 and 315,000 copies in the U.S. in its first full week of release.

“Hardwired… To Self-Destruct” arrived on November 18. It consists of two discs, containing a dozen songs and nearly 80 minutes of music. 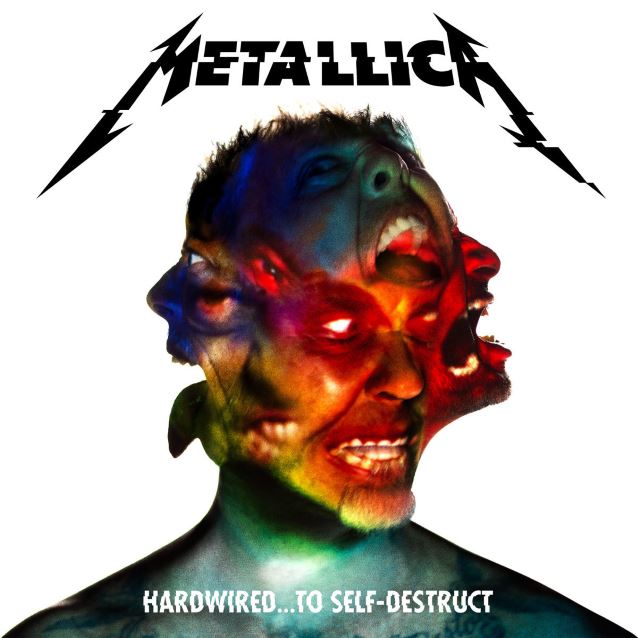